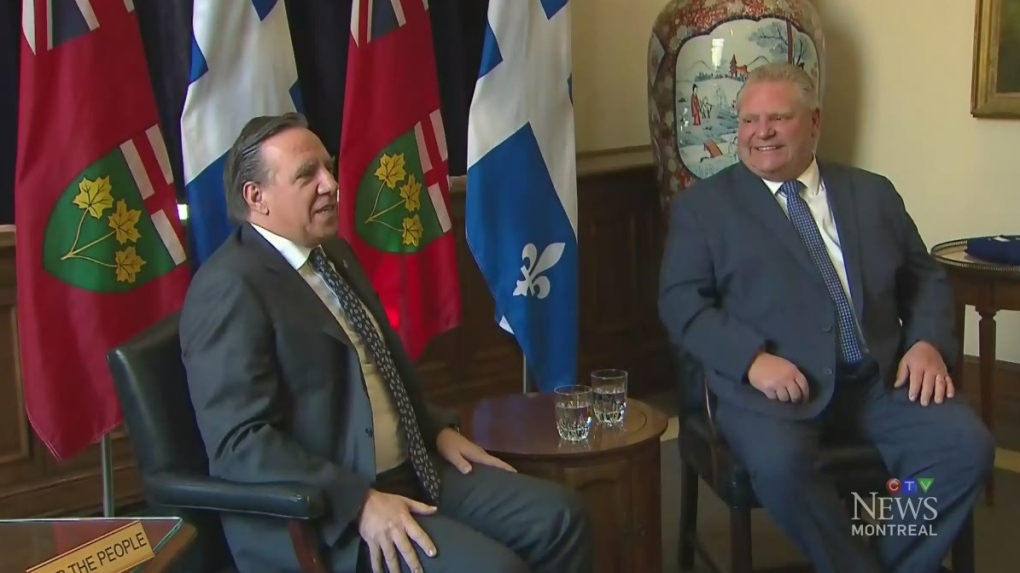 MONTREAL -- The premiers of Quebec and Ontario had dinner with each other on Friday and released a joint statement after their meeting.

The leaders found common ground on issues of immigration, healthcare and trade.

In the statement, Francois Legault and Doug Ford said they discussed the importance of immigration to both provinces' economies.

"Ontario and Quebec both need higher levels of economic immigration to close the employment gap and ensure businesses can access the talent they need to grow and succeed in every region," the statement said. "We are calling on the federal government to ensure our immigration system is flexible and responsive to those needs."

Legault's CAQ party came into power on the promise of taking fewer immigrants into the province but spending more resources integrating them into Quebec society. Provincial immigration minister Simon Jolin-Barrette recently backtracked on proposed changes to an immigration program that allowed students to settle in Quebec after studying in the province.

The two leaders on Friday also promised to invest in "critical public services like health care."

"We will continue to advocate for an increase to the Canada Health Transfer of 5.2 per cent annually in our efforts to end hallway health care," their statement said.

Doug Ford's Progressive Conservative party has cut healthcare funding since he was elected into office, sparking protests as recently as earlier this month. The Ontario Health Coalition keeps a running list of the Ford government's healthcare cuts.

"We repeat our call to the federal government to immediately ratify the Canada-United States-Mexico Agreement when Parliament resumes and actively counter damaging Buy American policies in order to protect Ontario and Quebec workers and businesses," the statement said.

It is unclear if the pair discussed Bill 21, Quebec's contentious laicity bill that bans many civil servants from wearing religious symbols. Earlier this week, The Ontario legislature voted to condemn the law and urged Ford breach the issue with Legault.

The two premiers will meet again soon, on Dec. 2, at the Council of Federation, in Toronto.