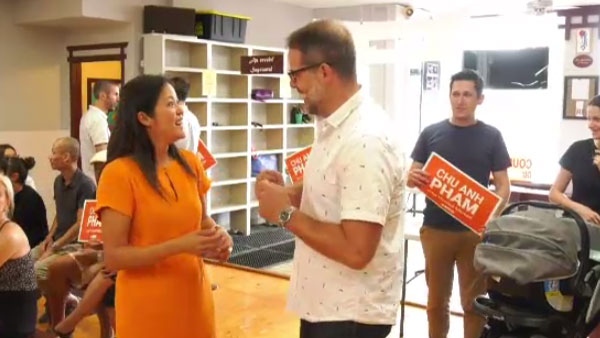 The New Democratic Party announced former journalist Chu Anh Pham will be its candidate for the Montreal riding of Honore-Mercier in October's federal election on Sun., Aug. 18, 2019.

The New Democratic Party announced its candidate for the Montreal riding of Honore-Mercier on Sunday.

Chu Anh Pham will try to retake the riding for the NDP in October’s federal election.

NDP deputy leader Alexandre Boulerice was on hand for the announcement.

The NDP’s Paulina Ayala defeated Liberal Pablo Rodriguez in the 2011 federal election as part of the Orange Wave. Rodriguez retook the seat in 2015.

A former journalist for CBC, La Presse and TVA, Pham has more recently been a senior advisor for public relations consulting firm TACT.

She criticized Prime Minister Justin Trudeau’s administration, saying she believes little has been accomplished in the past four years.

“Four years ago, Canadians and Quebecers were expecting lots of things because we suffered from the Conservative government,” she said. “If you look at everything in the four years, what can you recall from that government? They legalized cannabis but I didn’t know it was a national emergency to legalize pot.”