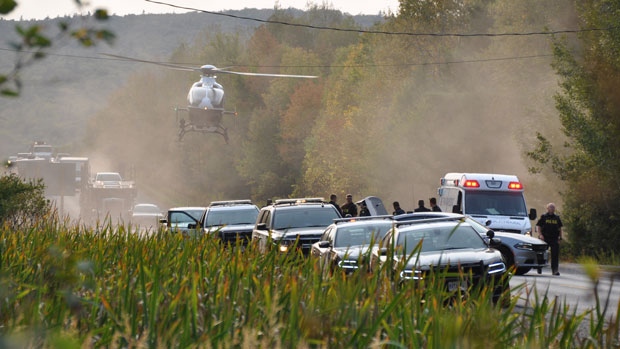 * CTV is no longer naming the child or his parents because the boy is now under the protection of youth services, and the law requires his identity be protected *

The father of a six-year-old boy who was the subject of an Amber Alert was brought to the emergency room after being injured in the custody of Ontario Provincial Police at the OPP Renfrew Attachment.

The man, 41, was going to be handed over to Quebec authorities on Saturday afternoon, a day after being found with his son in Griffith, Ontario.

A spokesperson for the Ontario Provincial Police confirmed the man is being treated in hospital. Authorities will not divulge any information about the man's condition or the nature of his injuries.

On Friday, his six-year-old son was found safe and sound while the father was arrested after a high-speed chase near Griffith, Ontario, 150 kilometres west of Ottawa, by the Ontario Provincial Police.

“(The boy) is safe. We just found him. The car was found in Griffith," said SQ spokesperson Martine Asselin. "We had an end that everyone hoped for."

Police say the boy was found inside the car. An OPP helicopter assisted in the case as officers on the ground were able to stop the vehicle on Highway 41.

"(He) was arrested. It's great news for everyone. The work of media, police and citizens, we thank you all very much," said Asselin.

On Thursday, the boy's 41-year-old mother was found dead inside her home as the Amber Alert was launched.

The mother of four's home was combed by crime scene investigators searching for evidence.

The woman had three other children from a previous relationship who were unharmed and are staying with their father.

Police would not confirm the cause of death.

Neighbours said the mother and father had an intense relationship and argued frequently.

Police are still looking for another man connected to the case, 71-year-old Yvon Lacasse.

The Honda CRV Lacasse was driving was used during the abduction. Police believe Lacasse could have been dropped off somewhere by the man.

"We believe that (Lacasse) was aboard the vehicle at a certain point in time. We are asking for the public's help in locating him," said Asselin.

Police say the man drove hundreds of kilometres across western Quebec and eastern Ontario since police began their hunt for the boy, who was the subject of an Amber Alert as of Thursday evening.

Police confirmed that the father spent Thursday night in Rouyn-Noranda and a witness then saw him in in Maniwaki on Friday morning.

Minutes later, police said he had been seen in Napanee, Ontario -- west of Kingston.

Nobody had seen the boy since Thursday afternoon.

At 5 p.m. Friday, the Surete du Quebec said the OPP had found the boy and captured the man, reportedly using a spike strip laid down on the road and a taser.

An Amber Alert was issued for the child at 5:35 p.m. Thursday. His father was seen leaving the family home Thursday afternoon in a white Ford pickup truck.

Police circulated a photo late Thursday evening that they believed was of the man and his son, taken at 7 p.m. Thursday inside a Wal-Mart in Saint-Eustache, but later admitted they made a mistake, and that the photo was not of the missing father and son.

The father has worked on several documentary films, including ones that focus on the topic of missing children.

Police spent 24 hours figuring out his route, and his plan, as clues were revealed piece by piece.

The first clue was the discovery of his pickup truck.

Sureté du Quebec Lt. Jason Allard confirmed that the truck was found at 2 a.m. in a park at the intersection of Route 329 and Rue Principale in Lachute, about 40 kilometres northwest of Saint-Eustache.

Police immediately began searching the woods and fields nearby, but later in the day it became apparent that the suspect was nowhere nearby.

The SQ used helicopters, search dogs, and dive teams in Lachute, but as of Friday afternoon had only turned up a broken cellphone believed to belong to the man.

The SQ later learned that when they found his pickup truck, he was hours away.

"(The suspect) slept in Rouyn-Noranda in a motel. We're not able to confirm that (his son) was with him," said SQ's Martine Asselin.

A witness then spotted the man in Maniwaki--about 250 km northwest of Lachute--between 8:30 a.m. and 10:30 a.m. Friday, meaning the man had driven more than 1,000 km since leaving his house on Thursday.

However once again, there was no sign of the child.

Police said that he has used at least two different vehicles, each of which he has abandoned, in his flight.

"We have no clue at this point where they are, what direction they are going, if they have taken another vehicle and they have left towards Ontario or towards Montreal. We are asking the population to continue to look out for them," said Allard before they were located.

Police say the father is still in custody of police in Ontario and is unlikely to be moved to Quebec before Monday. He is expected to appear in an Ontario courthouse on Saturday to face charges there and be held in police custody there through the weekend. Once he is returned to Quebec, he is expected to face additional charges.

Police say the son is in the care of Quebec child services and is safe and sound.

They say the investigation at the moment is focused on Lacasse's disappearance.

The grandfather of Cedrika Provencher, a nine-year-old girl who went missing from Trois-Rivieres in 2007, knows the boy's father, because he worked on a documentary about Cedrika's disappearance.

Henri Provencher had made a public plea to him to return the boy safe and sound.

Knowing you, I appeal to your father's heart, do not commit the irreversible, hand over your child to the police without further delay, so that he is safe. Thank you for acting as a responsible father. Think of your child.

I ask all his contacts to send him this message, hoping that he will receive it. A child has no price. Thank you for sharing and sharing. Please.