MONTREAL -- Dozens of climate protesters were arrested Tuesday night after they refused police commands to move out of a downtown street.

About 40 people were arrested as they sat blocking Rene-Levesque Blvd., a Montreal police spokesperson said. 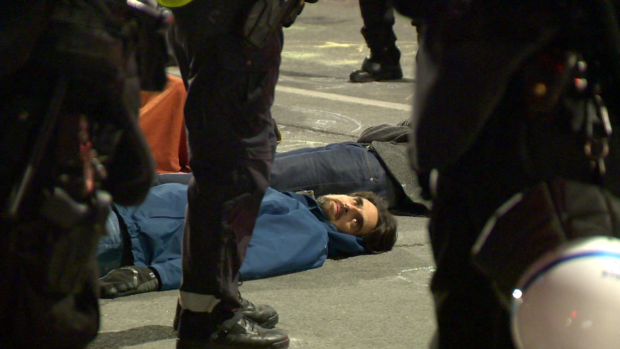 The SPVM warned them to move onto the sidewalk. Those who refused were arrested, the spokesperson added.

Earlier in the evening as many as several hundred protesters gathered in Place du Canada to protest a lack of climate action. A heavy police presence accompanied them.

The protesters are affiliated with Extinction Rebellion, the same group who, early Tuesday, blocked access to the Jacques-Cartier Bridge when three activists climbed it.

They are facing criminal charges, according to police.

Two women, aged 32 and 40, and a 47-year-old man, were interrogated by Surete du Quebec investigators after their arrests and are now facing charges of mischief and conspiracy. They have been released on bail and are due back in court Oct. 24.

The three protesters climbed up the Montreal side of the bridge around 6 a.m. and unfurled a banner calling for urgent action in response to climate change.

Police gradually had to block off lanes on the bridge before shutting it completely about 90 minutes after the protest began.

A specialized Montreal fire department unit climbed the structure to ensure the protesters' safety and convince them to come down.

In a statement, the group said its aim is to press governments to accept the climate crisis and make policy in line with existing scientific data. They demand among other things, that Canada reach net-zero greenhouse gas emissions by 2025.

The protest caused massive traffic snarls, as the span is a major link between Montreal and its suburbs on the South Shore. Traffic was restored just after 8:30 a.m.

Founded in Britain last year, Extinction Rebellion, also known as XR, now has chapters in some 50 countries. The group said the protests Monday were taking place in 60 cities worldwide. It kicked off what they called a week of rebellion, where they'll be participating in ongoing protests across the world.

Both directions of the bridge were re-opened around 8:30 a.m. 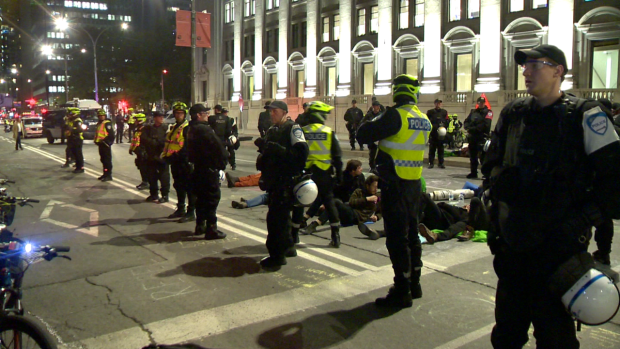 One of the protesters posted the following video on Facebook from the top of the bridge: