Despite their frequency, racist events continue to shock Canada and elsewhere 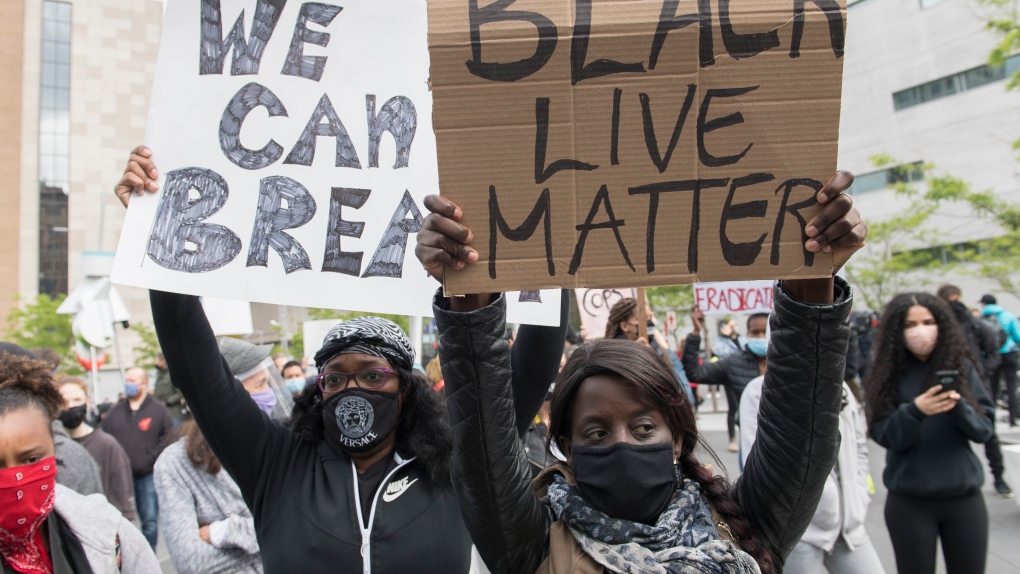 People hold up signs during a demonstration where they called for justice for George Floyd and all victims of police brutality in Montreal, Sunday, May 31, 2020.THE CANADIAN PRESS/Graham Hughes

MONTREAL -- The pandemic, despite its many challenges, is far from our only concern these days.

Week after week, the names of the victims of racism keep adding up.

Despite their frequency, these events continue to shock us here and elsewhere.

Respect for diversity is not just an American challenge. It exists here too.

We have witnessed the anger and the outrage that racism causes. They provide a clear signal of an urgent need to act.

It is high time to take concerted action through a long-term action plan that brings together all of society and which generates a lasting impact.

But, there are also things that we can do right now to step up the fight against racism and discrimination.

One example is education, which has long been a key battleground in this fight.

Recent events in both the United States and Canada remind us that the road toward recognizing and respecting our differences is a hard one.

That process starts with providing youngsters with the tools they need to foster dialogue on respect for diversity and openness to others. Studies show our children become set in their belief systems as early as 12 years old.

That makes education particularly important in raising awareness and breaking the persistent cycle of prejudice.

When earlier this year Quebec Premier François Legault committed to implementing a plan to fight racism and to set up a government action group, he noted that this must be done in line with the school system since "racism is not innate, it is transmitted."

We could not agree more.

This is what our organization, Ensemble for the respect of diversity, has been doing for the past quarter-century.

Our experience demonstrates that the educational environment is an ideal place to learn, unlearn and relearn in order to change mentalities and behaviours.

Schools provide a safe place to study and work on the toughest and most insidious forms of racism, which often include old reflexes which are so encrusted that they appear to us to be normal.

Young people are not just challenged by this issue; they also want to change things.

We meet an average of 25,000 young Quebecers in elementary and secondary schools in Quebec each year through a range of activities that we lead.

In a survey of participants who attended our interactive workshops, 81 per cent responded that they intended to take action against prejudice, racism and discrimination in their daily lives.

More than 90 per cent of their teachers said they wanted to support them in this process.

During the past few months, our youth have watched on their television screens and mobile devices as U.S. cities boiled over. They saw black squares on their Instagram feeds and listened to their idols who flocked to support the Black Lives Matter movement.

They saw, heard and shared. Today more than ever, we must continue our awareness-raising work to sensitize youngsters regarding their responsibility related to racism and other forms of intolerance in their environment, ranging from sexism to homophobia, transphobia, and other forms of bullying.

The last few decades have repeatedly reconfirmed the need to develop the capacity to identify daily manifestations of racism.

We must see these steps as a marathon that begins today and runs with future generations. That process starts with education.