Demonstration marks one year since adoption of Quebec's secularism law 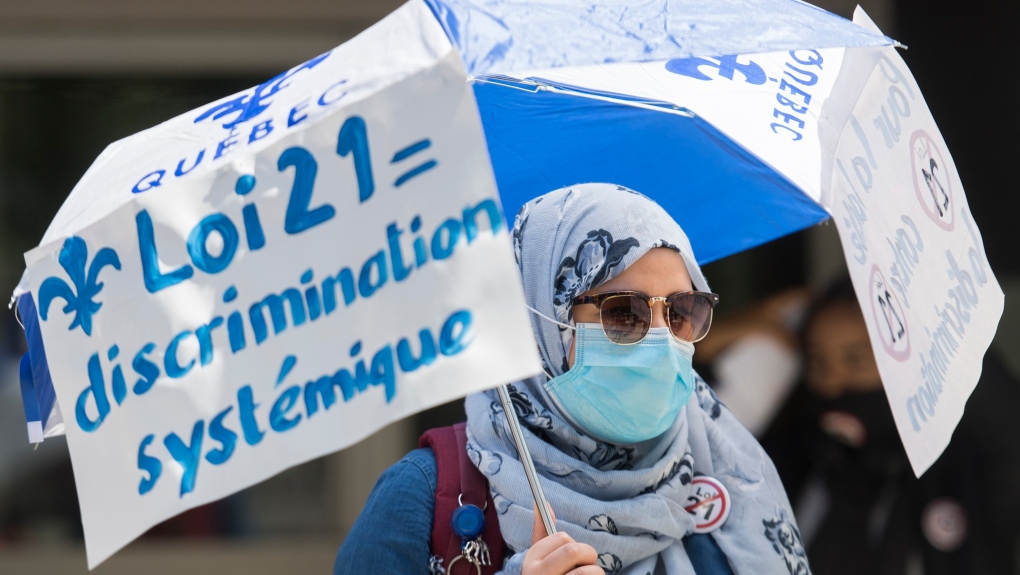 People protest against Law 21 outside Quebec Premier Francois Legault's office in Montreal, Sunday, June 14, 2020, on the one year year anniversary of the controversial bill. The COVID-19 pandemic continues in Canada and around the world. THE CANADIAN PRESS/Graham Hughes

MONTREAL -- A demonstration is being held in Montreal to mark the first anniversary of the passing of Quebec's controversial secularism law, known as Bill 21.

Those opposed to the legislation gathered in front of Premier Francois Legault's office in downtown Montreal today to denounce the law they associate with systemic discrimination.

The legislation -- which is the subject of several legal challenges -- bars some public-sector employees deemed to be in positions of authority from wearing religious symbols while at work such as turbans, kippas and hijabs.

Organizers of the demonstration noted the anniversary comes in the midst of a pandemic creating an unprecedented health, social and economic crisis as well a major call to denounce the racism and violence within institutions.

They called on the Quebec government to move away from policies that divide and move to unite the population for the challenges to come.

The Coalition Avenir Quebec government has previously defended the secularism law, saying it enjoys strong support among Quebecers and has described it as moderate.

The government invoked closure to adopt the secularism law on June 16, 2019.

This report by The Canadian Press was first published June 14, 2020.