Curfew to end across Quebec this Friday; second vaccine doses likely to be earlier than scheduled

And in an even better sign for the summer ahead, authorities added that Quebecers' second vaccine doses are also likely to be moved earlier.

"I looked at the numbers, and that made me smile all weekend," said the premier at a press conference, joined by Public Health Director Dr. Horacio Arruda and Health Minister Christian Dube.

"Vaccination is going well, but we must continue this way," said Legault.

"We need your solidarity to continue to win together," he said, saying he was speaking directly to young Quebecers.

SECOND DOSES LIKELY TO BE MOVED UP

With the province expecting an influx of Pfizer doses in June, it may allow people to get their second doses earlier than planned.

"Our objective actually is very simple," said Dube. "It is to bring all the second doses for September before the end of August."

The provincial booking website is being adjusted accordingly, he said.

"So, let's say somebody has a second dose in September, for example," he said.

"Somebody will be able to go to ClicSante and say 'I'm canceling my previous appointment, and I will take it sooner.'" 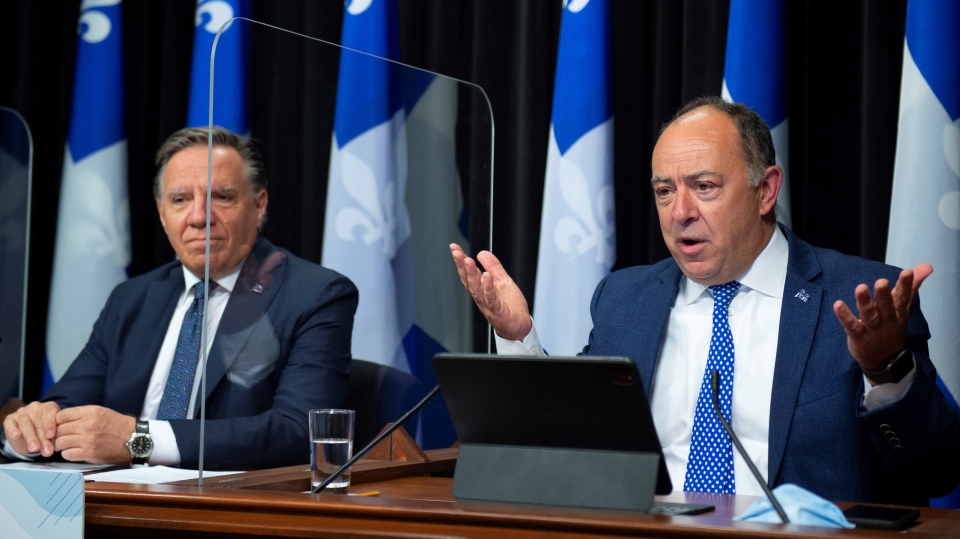 CURFEW TO LIFT THIS FRIDAY

Even in red zones, the curfew will lift on May 28. Restaurant terraces will reopen, and outdoor or backyard gatherings of up to eight people from two separate households will also be allowed as of that day.

Legault said that public health is expecting to bring the whole province to the orange alert level by June 7.

But it will go region by region before then. Orange will arrive in many regions as of Monday, May 31, with Montreal, Laval and other red zones expected to follow suit the week after.

On May 31, Quebec City, Monteregie, the Laurentians, Lanaudiere, and Outaouais will move to the orange level, meaning high-schoolers will return to class, gyms will reopen, and indoor dining will resume.

Along with Montreal and Laval, red zone rules will continue to be applied in Bas-Saint-Laurent, in the territories of the Kamouraska, Rivière-du-Loup, Témiscouata and Basques RCMs.

In the Eastern Townships, the MRC du Granit will remain at the red level while the rest of the region returns to orange. In Chaudière-Appalaches, the MRCs of Beauce-Sartigan, L'Islet, Montmagny and Robert-Cliche will remain red.

“Nevertheless, in the areas that remain red, the situation is improving," said Legault.

"And if the trend continues, everyone will be able to switch to orange on Monday, June 7.”