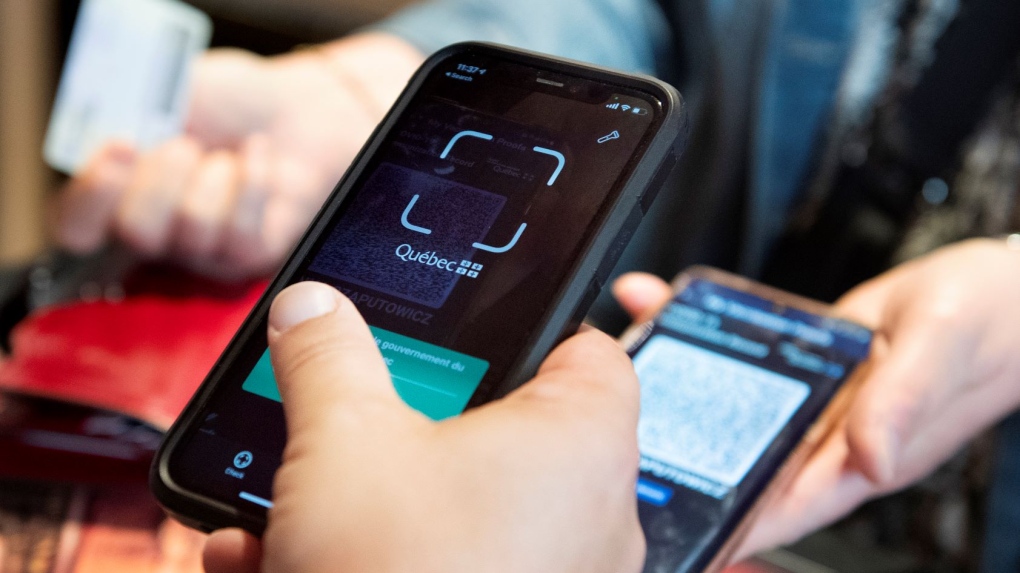 A Quebec judge will have to decide whether or not it is appropriate to rule on the legality of Quebec's vaccine passport while it is no longer in force since March 12.

Superior Court Judge Daniel Dumais was at the Saint-Joseph-de-Beauce courthouse Tuesday with a request from the Attorney General of Quebec to dismiss the action brought by lawyer Hans Mercier.

Mercier, who is representing himself, is trying to have the decree adopted on September 1, 2021 invalidated, which introduced the obligation to present proof of vaccination -- in this case the passport -- to have the right to access certain businesses and other public places.

Speaking on behalf of the Attorney General, lawyer Stéphanie Quirion-Cantin first argued that the decree was legal because it was issued on the basis of the articles of the Public Health Act, which gives the government the power to declare a health emergency and to institute the measures required to protect the health of the population.

THERE IS NO MORE LITIGATION LEFT

However, Quirion-Cantin argued that this decree was repealed on March 11 and that, as a result, the appeal became moot and, therefore, the court no longer had to rule on it.

"The decree no longer exists, and the conclusion of the appeal is to request the nullity of the decree, which no longer has any practical effect," she argued.

The lawyer invoked the Code of Procedure to remind the judge that "the courts are not obliged to rule on theoretical questions."

"A court may refuse to try a case when the court's decision will not have the effect of resolving a dispute that has or may have consequences for the rights of the parties."

"There is no longer any dispute," Quirion-Cantin insisted, while acknowledging that the court still has the discretion to decide in cases of "exceptional circumstances."

Justice Dumais, who played the devil's advocate throughout the proceedings, pointed out that, even if Quebec is currently experiencing a "truce" in the pandemic, "it is not said that there cannot be a resurgence of cases that could perhaps lead to the need to take new measures. Any of them."

He asked the jurist if, in such an eventuality, the question of "whether or not imposing a vaccine passport is legal, isn't that something, in the context in which we are, that it would be interesting to know, to have determined it beforehand?"

"There are surely elements of an answer that would be given by the court that could be interesting for everyone," the judge argued.

However, Quirion-Cantin retorted that "the effect of the judgment must be real. The courts must not be instrumentalized in political debates. The courts do not give legal opinions."

THE PROBLEM OF SOCIAL NETWORKS

The judge answered her point blank that "it's pretty much better to have a court ruling on the legality of something than to have the population ruling on social networks back and forth on anything. Everyone has their definition of legality, everyone is right."

He added that people "who have no legal training" are taking over social networks and "are pronouncing on the legality of things. Everyone tells us what is legal and what is not legal on social networks."

In response, Mercier deplored the fact that the constant modifications of the decree, which punctually added new places where the vaccination passport was required, forced him to constantly adjust his request, leading to a hearing after the lifting of the vaccination obligation. "It's an eternal restart and we find ourselves neutralizing the power of the courts," he said.

According to him, this situation has led to a debate on the need to hear the appeal or not since the vaccination passport is no longer required, rather than to debate the merits of his request, which raises the issue of discrimination.

"What I find terribly offensive about this, judge, is how it is being downplayed," he said. Then, to make his case about discrimination, he compared being barred from a restaurant to the situation in the United States, where "people of color could not go to certain restaurants."

Justice Dumais, however, immediately set him straight: "The ground was not quite the same. At the time, the reason was the color of the skin. Here, the reason is a question of public health," he said.

Mercier also sought to counter the theoretical argument of the debate, by the lifting of the vaccination obligation, by tabling a newspaper article in which "the Minister of Health (Christian Dubé) indicated that he was not closing the door to a return of the passport if necessary (...) and he advised to keep it on one's phone."

"I don't deny that the recourse is theoretical," he continued. "It is obvious. But when you say (that the remedy) can be justified on a theoretical issue of national importance, I think it's hard to deny that's the case here."

"This is not a normal academic question," he insisted. In his view, the court must decide whether the vaccine passport is discriminatory and does not meet the minimal impairment test in the charters.

However, Justice Dumais reminded him that the mere fact that there is discrimination does not mean that it is unconstitutional: "If it is discrimination, there can be justifications and at that point, it will be legal," he replied, taking the example of the 16-year-old driver's license: "It is discriminatory for 15-year-olds, but it is justified.

Mercier then spoke of the impact of refusing to hear the appeal on the merits in the general public, going so far as to bring the judge's words back to the table.

"There is going to be a social cost if the court says, 'I won't take this on. People are going to lose confidence in the justice system and then, in effect, start taking the law into their own hands.' And the phenomenon that you point out of stage managers will multiply by ten, even by a thousand," he argued.

Finally, another applicant in the case, notary Gaston Vachon, made short representations. Vachon, who is vaccinated, believes that having contracted the disease is equivalent to a vaccination passport.

He said he hoped the judge would agree to look into the merits of the case. "I would be very disappointed if the appeal were extinguished. I would like to have a judgment by a court. (...) If it is legal, we will comply," he said.

This report by The Canadian Press was first published in French on March 15, 2022.

Conservative MP Ed Fast said it was becoming 'untenable' to do his job as finance critic within the Conservative Party of Canada, which is why he asked to be relieved of his duties.

An independent group should review the use-of-force policy that guides New Brunswick police to ensure it is concise and understood by all officers in the province, a coroner's jury recommended Thursday.

A charity that focuses on helping LGBTQ2S+ refugees facing violence and discrimination internationally is calling on the Canadian government to partner with them to facilitate a way out for hundreds of Afghans who have reached out to them in desperation.

Prince Charles says he and Camilla, the Duchess of Cornwall, were departing Canada with 'heavy hearts' and a deeper understanding of residential schools after their royal visit wrapped in the Northwest Territories.