Cops out of uniform at Parizeau’s funeral showed lack of class: Coderre 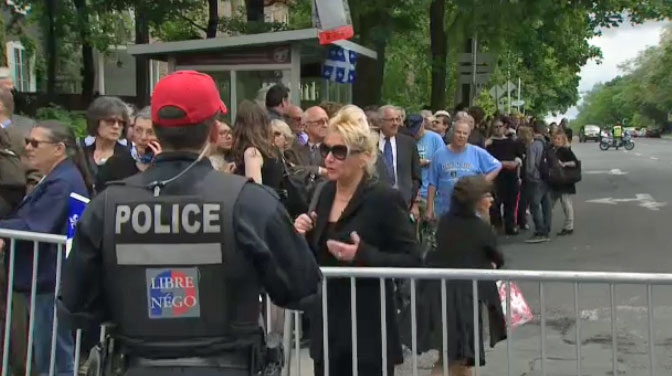 Police officers working at Jacques Parizeau's funeral were seen out of uniform.

Montreal's mayor gave the police union a dressing down Wednesday for wearing fatigues at the state funeral of former premier Jacques Parizeau.

He's asking the province to step in and legislate police to wear their full uniforms.

These wardrobe pressure tactics have gone on long enough, said Coderre, who first expressed his frustration in a tweet following the funeral Tuesday.

Officers have been sporting red baseball caps and camouflage pants as a protest over the government's pension reform.

Officers kept up their protest  by wearing red union baseball caps, 'Libre Nego' signs on their backs, and some were in jeans or camouflage pants at the solemn affair.

Coderre said wearing those clothes at the funeral of a former premier was classless and shameful, adding that they should have put their differences aside for this occasion as they did for the funeral of hockey legend Jean Beliveau.

Both he and Public Safety Minister Lise Theriault spoke about the matter at a news conference Wendesday. Theriault said the officers should have put their politics aside.

“I think in that time, the police they had to do the same thing like us, but they didn't do that,” said Theriault.

He is now he's asking Premier Couillard to pass a law requiring the officers to wear their full uniform.

The law wouldn't likely come until this fall.

The police brotherhood isn't commenting on the matter