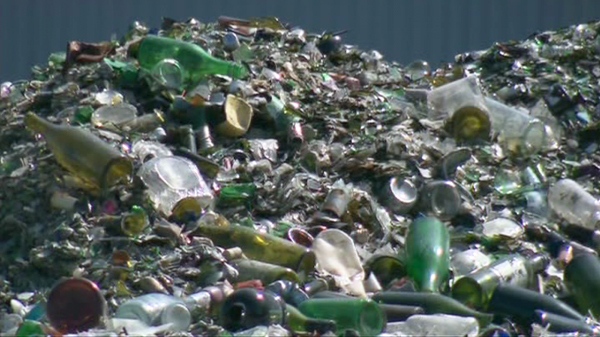 A pile of bottles and broken glass awaits recycling. (file)

Hearings began Monday at a parliamentary commission to find a solution to Quebec's glass recycling problem.

Last year, 78 per cent of the glass Quebecers put in their recycling bins ended up in landfills.

The commission will hear from key players in the recycling industry and environmentalists, some of whom want to see the sorting system modernized.

Others want a bottle deposit system.

Louise Henault-Etier is the science project manager for the David Suzuki Foundation.

"Several scientific studies have shown that the environmental footprint of washing your bottle and refilling it again is way less than if you were melting this bottle again into new bottles," she said.

The union that represents both SAQ workers and glass manufacturers thinks it's time Quebec establishes a refund system for glass wine and spirits bottles under the SAQ.

In its brief to the parliamentary commission studying recycling issues, the largest union centre in Quebec says the SAQ, as a Crown corporation, has a duty and social responsibility "to recover and recycle the containers it sells."

The FTQ, which represents both workers in glass manufacturing, as well as the SAQ, points out that glass containers in curbside recycling bins often break during transportation, which poses a risk of injury to workers in addition to damaging the sorting equipment and risk being contaminated by other materials. When the glass's purity is affected, the market value is reduced, the union said.

The SAQ president spoke at the hearing and says it supports the idea of a bottle deposit.

with reporting from the Canadian Press