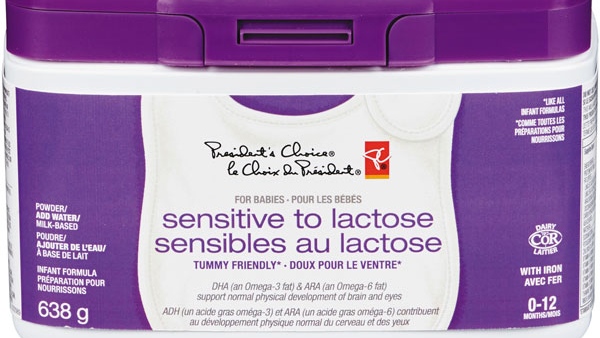 OTTAWA -- Loblaw is recalling the President's Choice brand milk-based powder product for lactose-sensitive babies due to the possible presence of Cronobacter bacteria.

The lower iron infant formula powder of the same brand was initially incorrectly identified as the recalled product.

The Canadian Food Inspection Agency (CFIA) said Sunday that the lower iron powder is no longer the target of a recall, while the possible contamination of the powder for lactose-sensitive babies has been confirmed by analysis results.

The product is sold in all provinces and territories across Canada. It is sold in a 638-gram format and includes the expiry date of 2020.

Cronobacter can cause rare infections of the bloodstream and central nervous system. It has been associated with severe intestinal infections and blood poisoning, especially in newborns.

Food contaminated with this bacteria does not necessarily have visible discolouration or a suspicious odour. The bacterium is not commonly linked to human diseases, but in rare cases can cause serious or life-threatening infections, as reported by the CFIA.

The agency says that this product should not be consumed. People who own it must throw it away or bring it back to the store where it was purchased.

So far, no cases of illness associated with the consumption of this product have been reported.

The report by The Canadian Press was first published Oct. 14, 2019.