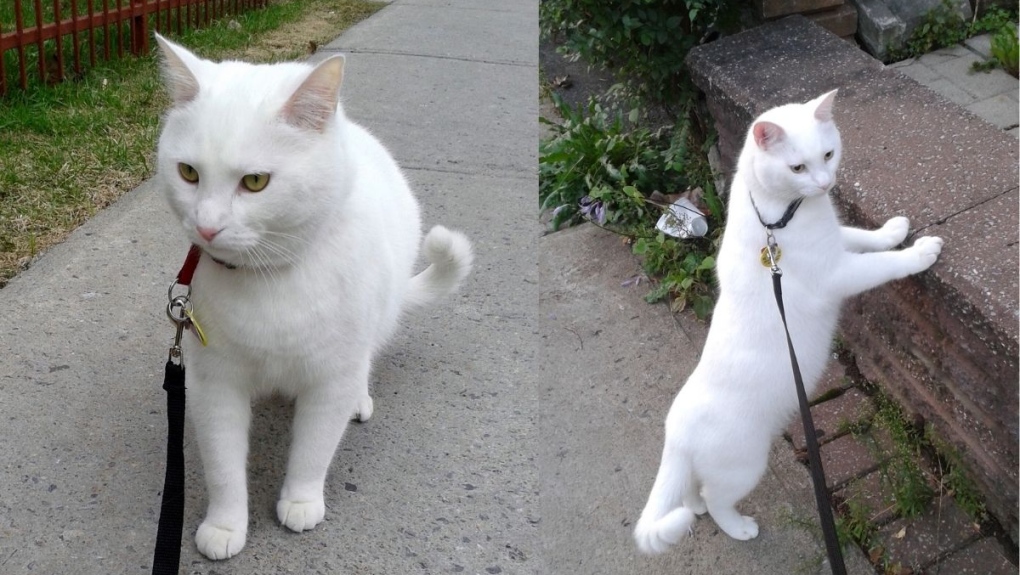 Quebecers with dogs can take their animals out after curfew, but cat owners must watch from their windows and wait for 5 a.m. no matter how hard the cats like Snow cry. SOURCE: Peter Strouzas

MONTREAL -- Peter Strouzas and his eight-year-old cat Snow have been forced to abide by the Quebec-wide curfew and watch from the window as dog owners take their pets out after 8 p.m. without risk of getting a fine.

Strouzas finds it unfair that dog owners can take their pets out on a leash at night, while he and his leash-trained cat risk picking up a $1,500 ticket when Snow wants to go out to do his business.

The owner called his vet, who said it's alright to take Snow out like he would if he were a dog.

However, when he called the Montreal police (SPVM), an officer said it was not okay, and that he'd be fined if caught out with his cat.

Quebec Ministry of Health spokesperson Noemie Vanheuverzwijn confirmed that Snow has to stay indoors at night along with all other animals that are not dogs.

"The decree is aimed only at dogs," she said in an email to CTV News. "However, it is allowed to walk your cat or any other animal outside of curfew hours."

Strouzas tried to train his cat to stay indoors when he was young, but Snow cried at the door, and he decided to leash train him. In the winter, Strouzas said Snow doesn't go very far, but that he cries to go out.

Strouzas is asking that the same rule apply to his cat that does to dogs.

"There's no difference," he said. "I think people think that cats usually go by themselves. Not too many people walk their cats with a leash."