Canadian tennis stars and some of the sport's all-time greats have some fierce clashes coming up in Montreal and Toronto this week.

Here are some events to watch in the coming days:

Montreal's biggest tennis star Felix Auger-Aliassime, 22, will play his opening match on Wednesday in the second round, with his opponent yet to be determined.

After winning his first career ATP title at the Rotterdam Open in the Netherlands this year, the sixth-seeded World No. 9 received a bye for the first round with his career-high ranking.

Meanwhile, 22nd-ranked Denis Shapovalov will fight to stay in the tournament by continuing last night's match against Australia's top tennis player Alex de Minaur. The match was paused due to rain, giving the Canadian a chance to make a comeback today as he trails: 7-5, 6-6 (3-3). Denis Shapovalov of Canada plays a shot to Alex de Minaur of Australia during their first round match at the National Bank Open tennis tournament in Montreal, Monday, August 8, 2022. THE CANADIAN PRESS/Graham Hughes

Laval-born Alexis Galarneau, 23, will also play his first-round match on Centre Court today against Bulgaria's Grigor Dimitrov, a former World No. 3, around 1 p.m.

Currently ranked 237th, Galarneau will make his first-ever appearance in the main singles draw of an ATP Masters 1000 after receiving a wildcard at the Canadian Open. Earlier in July, he reached the final of the Winnipeg National Bank Challenger.

Another Canadian, 147th-ranked Vasek Pospisil, is set to begin his match at 11:30 a.m. on Tuesday on Centre Court against the American Tommy Paul. The U.S. player leads the head-to-head against the Canadian at 2-0.

Three-time Grand Slam champion Andy Murray from the U.K. will face the 10th-seeded American Taylor Fritz. After his hip resurfacing surgery in 2019, the 35-year-old former World No. 1 will appear in front of the Montreal fans once again tonight at 6:30 p.m. on Centre Court.

FERNANDEZ, ANDREESCU BACK IN TORONTO, SERENA TO RETIRE FROM TENNIS

The 19-year-old Laval native faced an early test on Monday after a three-set thriller against Australia's Storm Sanders, winning 6-4, 6-7(2), 6-3. For Fernandez, this was the first match since she suffered a stress fracture in her foot in the Roland-Garros quarter-final in Paris. 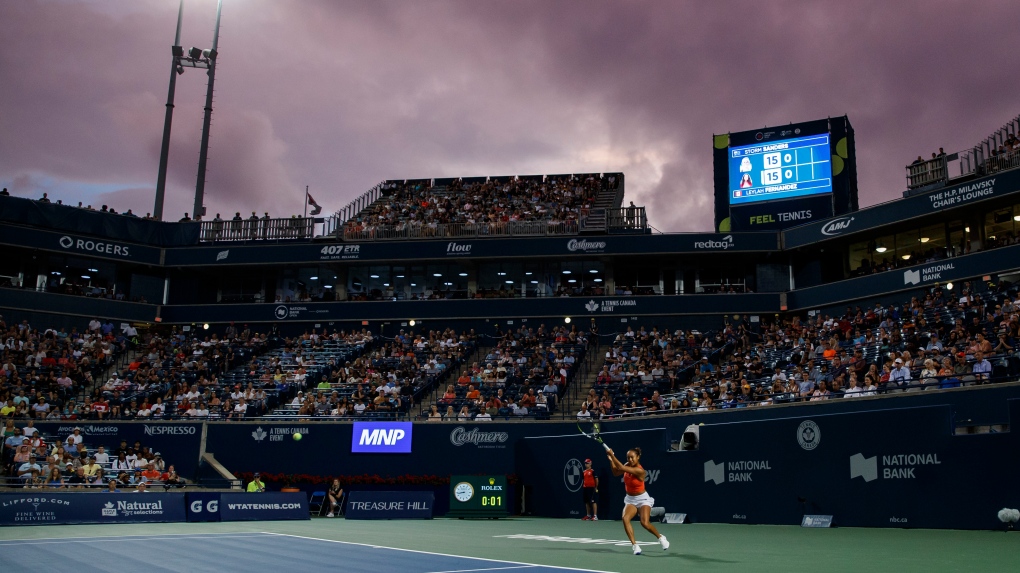 Leylah Fernandez of Canada returns a ball to Storm Sanders of Australia during women’s tennis action at the National Bank Open in Toronto, Monday, Aug. 8, 2022. THE CANADIAN PRESS/Cole Burston

She will also play a first-round doubles match with her sister Bianca Jolie Fernandez at 1:30 p.m. today on Court 1.

Today's evening session on Centre Court will feature Mississauga-born Bianca Andreescu, 22, who will face Russia's Daria Kasatkina in front of her home crowd at 7:30 p.m.

Currently ranked 53rd, Andreescu became the first Canadian woman in 50 years to win the tournament in 2019, defeating Serena Williams in the final.