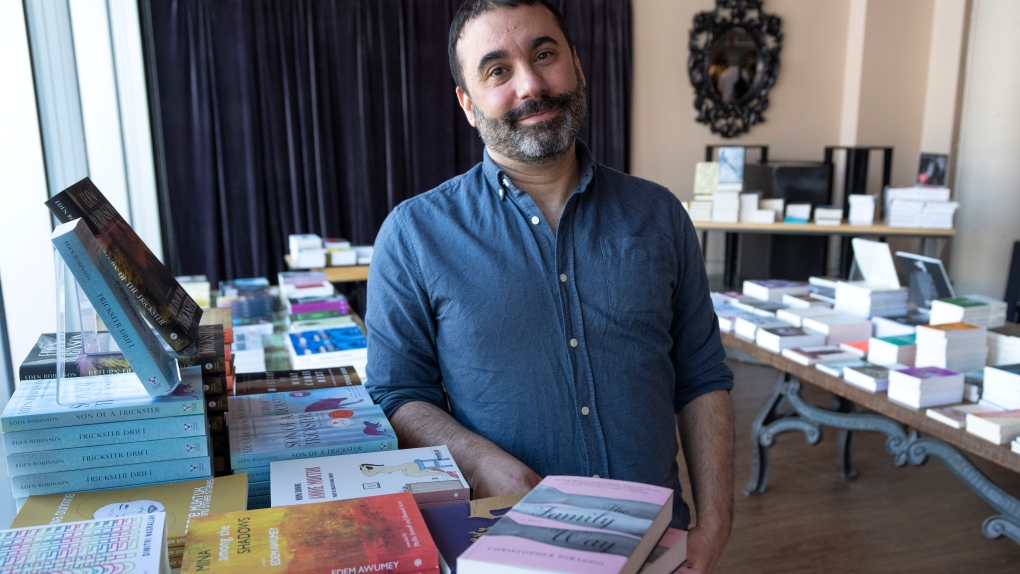 When Christopher DiRaddo's second book was published last year during the COVID-19 pandemic, the Montreal author was disappointed he wouldn't be able to mark the achievement with a glitzy in-person book launch.

Instead, he got creative. In addition to a virtual launch, he and his partner created special gift bags that included a signed copy of his book "The Family Way," and drove all around the Montreal area delivering them to customers in person.

Unlike a traditional event, where he can often only spend a few moments with each attendee, he said the personalized visits gave him an opportunity for deeper connections with customers and old friends.

"In a weird way, it was almost like a reimagining of what a book launch could be," he said in a recent phone interview.

As in-person literary events resume, authors like DiRaddo say the creative marketing solutions learned during lockdowns, as well as a pandemic-spurred rise in reading, give them hope for the future of their industry.

Several authors and publishers interviewed by The Canadian Press said the pandemic was hard on brick-and-mortar stores, which had to contend with weeks or months of forced closures, capacity limits and cancellations of book launches and meet-and-greets.

Chris Hall, co-owner of Winnipeg-based McNally Robinson Booksellers, said that while 2020 was a "catastrophic" year for many small bookstores, including his own, there are signs of a rebound.

While every store is different, he said his chain "roared back" in 2021, surpassing its 2019 sales despite pandemic challenges and the near-collapse of the market for book categories such as travel.

Hall, who is also president of the board for the Canadian Independent Booksellers Association, attributes the positive change to Canadians' increasing willingness to support local businesses and to more people who picked up reading when other activities were cancelled.

"After a couple of months, there's only so much Netflix you can watch," he said in a recent phone interview.

Statistics Canada found that total book sales in Canada declined by 7.7 per cent from 2018 to 2020 -- a phenomenon it chalked up in a February report to "the nationwide closure of bookstores during the early months of the pandemic, as well as the capacity limits at bookstores after they were allowed to open and consumer hesitancy to go to public places."

While the numbers for last year weren't published, Statistics Canada suggested in its report that there was a growth in retail book sales in 2021, as the restrictions on other entertainment options led more people to take up reading.

Nevertheless, the industry continues to face volatility and is "grappling with challenges, as supply chain woes are impacting paper mills and printing capacity, shipping availability, transportation networks, and costs," the report said.

Data from BookNet Canada, a non-profit that serves the country's book industry, indicated that sales of physical books increased 1.6 per cent in 2021 compared to 2020, though they remained below 2019 levels.

In an email, the non-profit suggested sales were up three per cent this year over the same period last year.

While concrete data indicating improving fortunes is still preliminary and often anecdotal, the authors and booksellers who spoke to The Canadian Press see reason for cautious optimism.

Sruti Islam, a bookseller and creator of the online literary space Weird Era, took part in a discussion on Friday hosted by DiRaddo on how book promotion has evolved.

Islam, who works with Montreal indie bookstore Librairie St-Henri, said the pandemic brought challenges related not only to closures and cancelled events but also to supply chains, which led to back-ordered books sometimes taking a long time to arrive.

On the other hand, she said it created an opportunity to host online events, which were well-attended. She also launched a literary podcast, which is now in its second season.

She said she's seeing rising interest among the public in political and social issues, which leads to "more interaction from our neighbourhood clientele wanting to engage more politically with texts and wanting to support local business more than ever."

Hall said brick-and-mortar stores have benefited from being forced during the pandemic to improve online sales options, such as click and collect, and by boosting their social media presences.

Some authors are also benefiting from a marketing boost from young influencers who use social media platforms such as TikTok, where a subcategory often dubbed BookTok has become popular enough to send sales of some titles shooting upward, even years after publication.

It's unclear whether the population's newly rediscovered interest in reading will wane now that pandemic restrictions are over and people have more entertainment options.

Hall can only hope so. He said he's optimistic the pandemic was long enough to have allowed people to entrench their reading habits and that they'll want to return to those "quiet moments" as the world speeds up. He said he also hopes independent bookstores will be able to combine their improved capability to operate online with the attraction of a physical space for readers to meet.