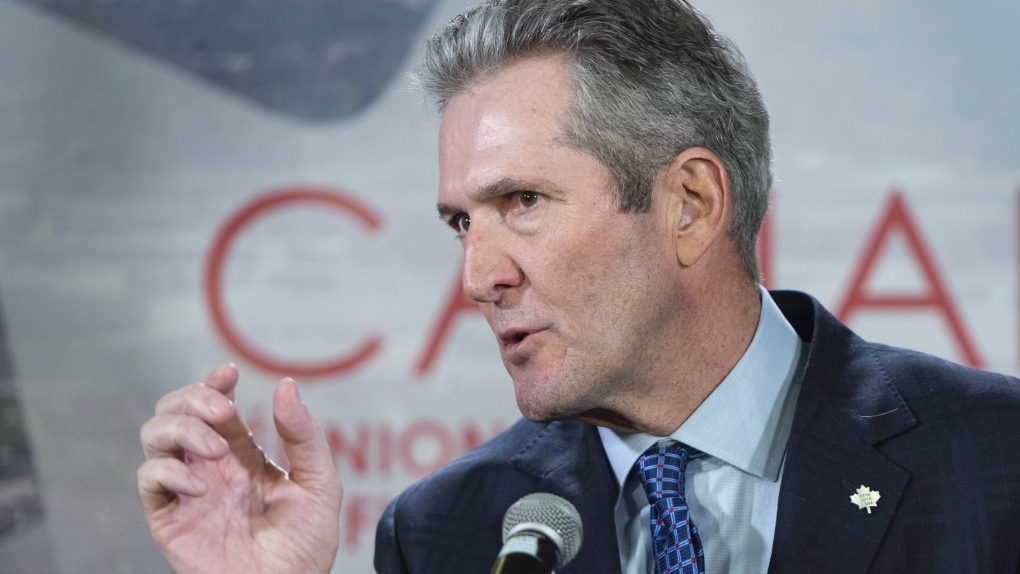 Manitoba Premier Brian Pallister responds to questions during a news conference at the first ministers meeting in Montreal on Friday, December 7, 2018. (THE CANADIAN PRESS / Paul Chiasson)

WINNIPEG -- The Manitoba government is taking out newspaper and electronic advertisements in Quebec that welcome civil servants there to move to Manitoba if they feel threatened by their province's ban on religious symbols in the workplace.

The ads, which are to start rolling out Thursday, are the latest overt criticism of the legislation from Premier Brian Pallister, who has raised the issue at meetings with his fellow premiers.

"Here in Manitoba, we have respect for diversity," Pallister said Wednesday in an interview with The Canadian Press.

"We respect personal freedoms and rights, and we're not big on clothing police here."

The Quebec law bans some public-sector employees, including teachers and police officers, from wearing religious symbols such as hijabs for Muslim women and yarmulkes for Jewish men in the workplace.

Quebec Premier Francois Legault has defended the legislation as a legitimate way to ensure secularism in the public sector. He has said the law is supported by Quebecers.

Pallister said Manitoba has a shortage of bilingual employees in some areas of its civil service. The ads allude to 21 reasons to consider a move to Manitoba -- a play on Quebec's Bill 21 before it became law.

The budget for an initial round of ads is about $20,000, Pallister said, with more to follow depending on how they are received.

Is Pallister concerned about ticking off the Quebec government?

"It's too late for that. I understand that the premier feels he's well within his rights in Quebec to go with something that's popular," Pallister said.

In July, Pallister wrote letters to Quebec professional organizations, colleges and other entities to invite public-sector workers to move west. There was no take-up on that offer.

"At this time there have been no specific responses or inquiries from those organizations," read a written statement from Manitoba's civil service commission.

Pallister and his Progressive Conservative government introduced a resolution in the Manitoba legislature Wednesday to condemn the Quebec law.

The resolution is a non-binding expression of the collective will of legislature members. The Ontario legislature passed a similar resolution earlier this month.

Manitoba's Opposition New Democrats supported the idea and proposed an amendment that they said would strengthen the wording, in part by expressing support for a constitutional challenge of the Quebec law.

"Any policy, any legislation, any ruling that is based upon how you look or what faith you practise, is not right," NDP heritage critic Diljeet Brar told the chamber.

This report by The Canadian Press was first published Nov. 27, 2019.