Alouettes revert to ground attack in 32-27 squeaker over Eskimos 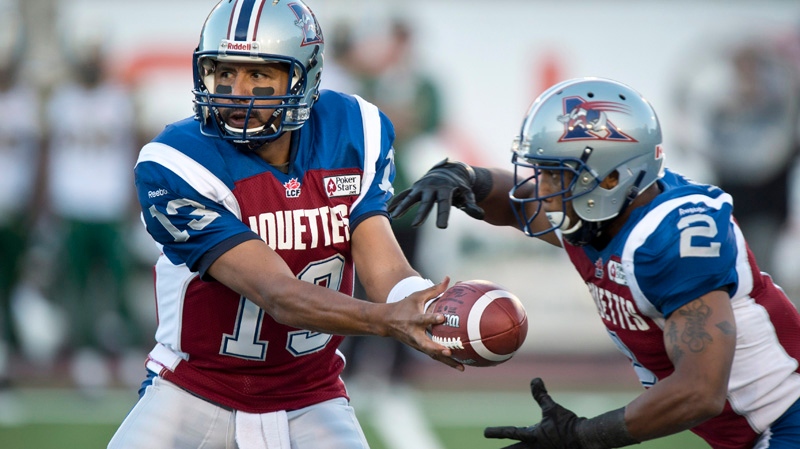 MONTREAL -- The Alouettes won a narrow victory over the Edmonton Eskimos thanks to an impressive goal-line stand and a running back whose feet were flying all night.

Brandon Whitaker ended up with a career-high 162 rushing yards and a touchdown as the Montreal Alouettes ended a three-game losing streak with a 32-27 victory over the Edmonton Eskimos on Thursday night.

Whitaker was tearing up the CFL last year before blowing out a knee, and had been quiet through the first four games of the season before finally breaking out against the struggling Eskimos.

"It felt good," said Whitaker, who gained only 24 yards in the first half but then erupted for 138 in the final 30 minutes. "That was the most carries I got in a long time.

"It felt good to run the ball and block. It just felt good to win. I've still got a bit of work to do. I don't feel 100 per cent myself, but it's definitely coming."

Anthony Calvillo threw a touchdown pass to S.J. Green, and Sean Whyte booted six field goals for Montreal (2-3), which has won seven in a row against the Eskimos over the last four seasons.

Cary Koch scored on a kick return and a reception while Calvin McCarty also had a TD catch from Mike Reilly. Grant Shaw kicked two field goals for Edmonton (1-4), which has lost three in a row.

A game filled with penalties and errors by two teams at the bottom of their respective divisions had the 23,012 at Percival Molson Stadium on their feet for a thrilling finish.

The ground attack was critical for Montreal as Reilly led a second half comeback and came within a yard of stealing the victory for the Eskimos.

Montreal took a five-point lead with one minute to play, but Reilly marched the Eskimos down the Montreal one-yard line with one play left in the game. However, John White was stopped behind the line of scrimmage by Chip Cox as time expired.

Reilly had been pulled in the second quarter when the offence stalled, but finished the game with 16 completions for 262 yards and touchdown passes to Koch and McCarty.

"It was a tremendous step forward (for Reilly)," coach Kavis Reed said. "When a quarterback is down by five with less than a minute left and you have to drive a football down and get in a position to win, and to execute it almost flawlessly, I think that's a leap for him."

There had been speculation that Montreal may fire first-year coach Dan Hawkins or offensive co-ordinator Mike Miller if they lost, but the Alouettes responded with with their best offensive performance of the season.

Now they can go into a bye week with some confidence.

"I thought Mike called a really good game," said Hawkins. "Kept them off balance for the most part, and you know, when we get an opportunity to run the football and get some continuity, you want to.

"But it's tough. If we get stopped a few times you get out of your rhythm. But Mike called a really great game and the O-line did a good job and B-Whit (Whitaker) did a nice job too."

They had a five-minute edge in time of possession and finally got the mix of air and ground attack to move the yardsticks consistently.

Calvillo had 202 yards on 19 completions and Whitaker did the rest.

But it wasn't easy.

Whyte's field goal gave Montreal a 26-13 lead at 1:18 of the fourth quarter, but Edmonton struck back with a pair of TDs in a 1:21 span to take the lead for the first time.

Reilly helped set up the first one himself as he ran for 20 yards, then hit McCarty with a 20-yard TD pass at 2:16.

Whitaker fumbled on Montreal's next play from scrimmage, and one play later, Reilly found Koch in the end zone with a 24-yard pass for another TD.

But Montreal bounced back as a poor Shaw punt gave them the ball at the 29 and Whyte booted his fifth of the night for a two-point lead with 4:12 left to play. He added another kick at 14:00.

Then Reilly went to work, completing a series of passes to move the ball first to the Montreal 5, then to the 1. He took the final snap from the shotgun formation, but time expired as White was stuffed by Cox behind the line of scrimmage.

"If they had it to do over again they'd probably line up and try to push us through," said Cox. "But coach (Noel Thorpe) called a good play and we made it."

Linebacker Shea Emry, who had two interceptions, said the win was good but the Alouettes can't go away thinking all their early season problems are solved. Penalties remain a problem for both teams, as the Alouettes took 10 and Edmonton 13. And there were still moments of confusion.

"It's one game and there's still lots of stuff for us to work on out there," said Emry. "Lots of penalties, lots of mistakes that are costing us points.

"Luckily we've got a bye and we can heal up a bit and move on to the next game."

It was the first win by an East Division team over the West this season (1-6).

Edmonton has not won in Montreal since 2007.

The Eskimos used all three quarterbacks in the first half but picked up only a pair of Shaw field goals as Montreal took a 20-6 lead.

A weak punt by Shaw gave Montreal the ball on the Edmonton 40 and they converted that with a field goal 4:58 into the game. Reilly's 44-yard toss to Fred Stamps set up Shaw's 26-yard boot to tie it at 7:14.

Emry picked off a Reilly pass at the 18 and, four plays later, Calvillo hit Green with a six-yard TD pass at 13:47. It gave Calvillo a personal record 22 straight games with a passing TD.

Jonathan Crompton took over at quarterback and promptly threw another interception to Emry, setting up Whyte's 31-yard kick 5:36 into the second quarter.

Noel Devine then fumbled a punt on the Montreal 17 for his second kick return fumble in as many weeks. Kerry Joseph took over behind centre, but the Eskimos settled for Shaw's 18-yard field goal at 8:51.

A late Montreal drive saw Whitaker run in a TD from the 13.

Reed said pulling Reilly was part of the learning process for a quarterback in his first year as a starter.

"He understood what we were trying to accomplish. He went back in and played exceptionally well."

The Eskimos started the second half as Koch returned a punt 81 yards for a TD at 4:39. It was the team's first punt return TD in two years.

Kyries Hebert had two first-half sacks to take the league lead with seven.

Notes: Former Eskimos running back Jarome Messam did not dress for Montreal. He reportedly has turf toe. . . Edmonton cornerback Joe Burnett (leg) sat out and Chris Rwabukama dressed. . . Reilly is the fourth different quarterback in their last four meetings to start for the Esks against Montreal, after Ricky Ray, Jarious Jyles and Kerry Joseph. . . Not seen this season is Alouettes mascot Blitz, who has been retired. The inflatable-headed Blitz once took a five-yard penalty in a game for knocking an official's cap off during a TD celebration. They have another mascot called Touche.