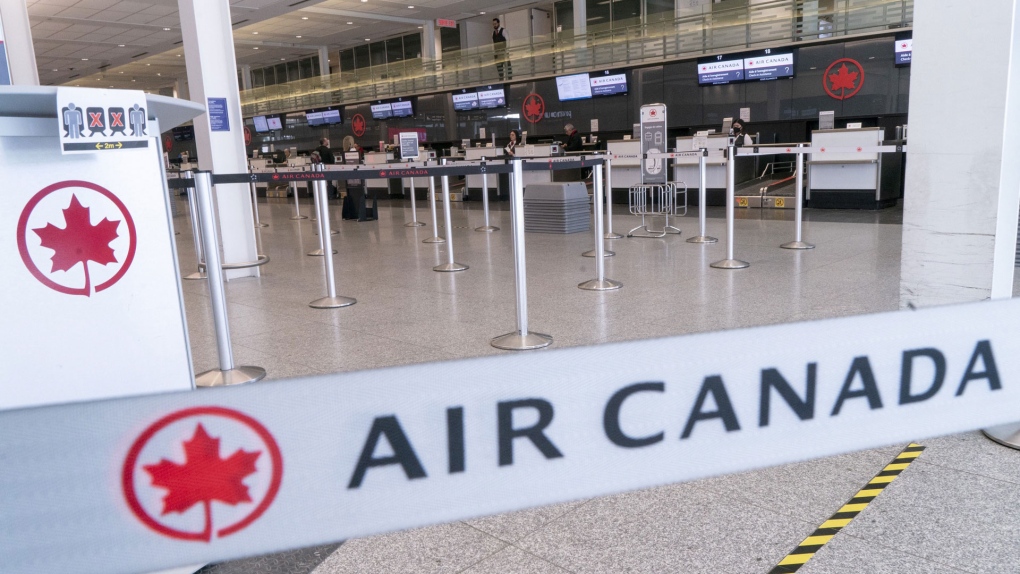 MONTREAL -- Air Canada suffered a $1.75-billion loss last quarter as revenues plummeted amid travel restrictions and a collapse in demand stemming from the COVID-19 pandemic.

Passenger revenues at the Montreal-based company dropped by 95 per cent compared with the same period last year, while the airline burned through $19 million of cash per day, prompting the CEO to renew calls for looser controls on travel.

Calin Rovinescu said current travel restrictions in Canada amount to "one of the most severe aviation lockdown regimes in the world" and that Ottawa and the provinces should lower the barriers with "tremendous urgency."

He also mentioned ongoing interprovincial travel barriers he called "inconsistent" with the Charter of Rights and Freedoms as well as government advisories to avoid non-essential travel, which prevent passengers from securing insurance.

"While needed and appropriate at the outset in March, these constraints still remain in place, unadjusted, despite the availability of more targeted measures that can achieve the legitimate public health objectives. And their combined effect has been to decimate the airline business and prevent the possibility of any real recovery at a time of otherwise fragile demand," Rovinescu said on a conference call with analysts Friday.

The fallout prompted Air Canada to let go of more than 20,000 of its 38,000 employees last quarter. It also permanently retired 79 airplanes -- nearly 30 per cent of its fleet -- and grounded others to reduce its network capacity by 92 per cent.

The company suspended all service to the U.S. for most of May, maintaining an international presence in only five airports abroad.

The runway to recovery looks long. The Canada-U.S. border closure has been extended to Aug. 21, but Rovinescu said that date is "unlikely," with Air Canada predicting a reopening no sooner than October.

A return to 2019 passengers levels "could well be longer than three years" from now, he said, noting the four-year recovery forecast by the International Air Transport Association.

Air Canada plans to serve 91 destinations this summer, nearly double the number from the May nadir but well under half of last year's peak.

It is not ruling out further route suspensions or order cancellations for Airbus A220 -- the former C Series manufactured by Bombardier in Mirabel, Que. -- or Boeing 737 Max planes.

Air Canada saw net income drop by 84 per cent year over year while total revenues plunged to $527 billion in the quarter ended June 30 from $4.74 billion a year earlier.

Passenger revenues fell to $207 million, softened by a doubling of cargo revenues to $269 million -- the first time the latter has exceeded the former, said chief commercial officer Lucie Guillemette. The airline has ripped the seats out of four Boeing 777s and three Airbus 330s -- both wide-body planes -- to convert them into cargo craft.

Air Canada was expected to lose $1 billion or $3.96 per share on $436.3 million of revenues, according to financial markets data firm Refinitiv.

The country's largest airline says it has access to $9.12 billion of cash after raising $5.5 billion in new equity, debt and aircraft financings since March.

"As with many other major airlines worldwide, Air Canada's second-quarter results confirm the devastating and unprecedented effects of the COVID-19 pandemic and government-imposed travel and border restrictions and quarantine requirements," Rovinescu said.