A radicalized man: Who was Martin Couture-Rouleau?

Authorities are trying to figure out what motivated Martin Couture-Rouleau to drive his car into two soldiers, killing one of them, in St. Jean sur Richelieu Monday.

Couture-Rouleau converted to Islam less than two years ago, and neighbours said he went to nearby Al Iman Mosque three to four times a week to pray.

The president of the Haut-Richelieu Muslim Association chose not speak to CTV Montreal on the matter, but did confirm Couture-Rouleau attended the mosque. He said they exchanged few words.

Couture-Rouleau and his wife had split up after having a child together. His social media profile shows frustration with the beliefs of atheists and Christians.

His posts on Facebook came to a halt in May, except for a final post on Oct. 17 when he changed his profile to an image of two open doors, one leading to a sky full of clouds and the other to people burning in fire.


A woman who did not want to be identified said she attended high school with Rouleau at Polyvalente Chanoine-Armand-Racicot and was shocked to see his photo on the news.


“It was weird to see someone I knew in high school turning into a radicalized Muslim,” she said. “He was super polite and nice. In high school he was very normal, from a normal family.”

The Surete du Quebec has determined that Couture-Rouleau intended to attack the military in some fashion, and was sitting in the parking lot outside a military office for more than two hours before he ran down Patrice Vincent and another soldier.

"What I can say is right now, the working thesis is that it's a deliberate act. With regards to how it was planned, it's really hard to say. The investigation is starting, we're going to stick to the facts," said Lt. Guy Lapointe of the SQ.

Couture-Rouleau converted to Islam in 2013, and according to RCMP Commissioner Bob Paulson, "He was one of about 90 people who were under investigation" by Mounties.

At this point police do not believe that Couture-Rouleau was operating with anyone else, but Paulson confirmed that authorities revoked Couture-Rouleau's passport several weeks ago out of the fear he would go overseas to join radical Islamists.

The RCMP confirmed Tuesday afternoon that Couture-Rouleau’s family noticed a change in him last year and consulted authorities. The RCMP began to investigate Rouleau in June and arrested him July, revoking his passport after he attempted to travel to Turkey. The RCMP released him without enough evidence to charge him for any crime.

Radicalized thoughts are not a crime in Canada, said the RCMP.

They last met with Couture-Rouleau on Oct. 9, but still found it impossible to predict the terrorist act, because he acted alone, and the weapon in this matter was a car.

Former CSIS agent Michel Juneau-Katsuya said about "13,000 young westerners have been recruited via the internet and radicalized this way."

According to the security analyst, there are "130 young Canadians abroad which have joined terrorist groups including ISIS. Eighty young people have returned from Syria and Iraq and have been with ISIS for a certain period of time."

The RCMP, Surete du Quebec and Montreal police are all urging anyone who notices an abrupt change in a friend or family member to not hesitate to contact them. 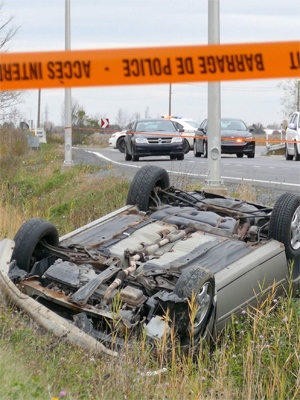