10 arrested, over 140 tickets given as thousands protest in Montreal against pandemic public health measures

MONTREAL -- Ten people were arrested and 144 tickets were given out during a large protest in Montreal against Quebec's pandemic public health measures on Saturday afternoon.

The assembled crowd numbered in the thousands for the protest, which was the largest held since the pandemic began.

Charges for those arrested include obstructing a police officer, assault of a police weapon and posession of a weapon.

Police said many people in the crowd were not wearing masks, a violation of the province's rules aimed at curbing the spread of COVID-19.

SPVM spokesperson Manuel Couture added that there were many families in the crowd who were not seeking confrontation with police, but that "there (were) a few small groups who confronted police and do not respect public health measures."

The crowd first gathered at 12:30 p.m. near the intersection of McGill College Ave. and Sherbrooke, near the Montreal office of Premier Francois Legault.

Beryl Wajsman, editor of The Suburban, was among those given a ticket. He said he had spoken to one police officer about where was permitted to stand as a member of the media and was led to a cement block near the premier's office, but two other officers soon came over and grabbed him, accusing him of not wearing a mask.

"I said 'I don't have to wear a mask, your colleague put me here a minute ago, I'm 20 feet from the demonstration, there isn't anybody around me and I have chronic bronchitis, I have a dispensation from wearing a mask,'" he said.

Wajsman accused Montreal police officers of "thuggery," and he plans to protest the $1,500 ticket in court.

The march ended at the same spot where it began at 5:30 p.m. After it had mostly dwindled down to around 100 people, police said there was a small confrontation where a group threw objects at police and were then met with pepper spray.

Quebec has seen several protests against public health regulations over the course of the pandemic. Last week, demonstrations were held in Montreal and Quebec to call for a return of organized sports. Days later, the provincial government said some indoor sports activities would be permitted to resume on March 26.

Other protests have called for houses of worship to be named essential services, condemned the province's curfew or singled out the province's mask regulations. 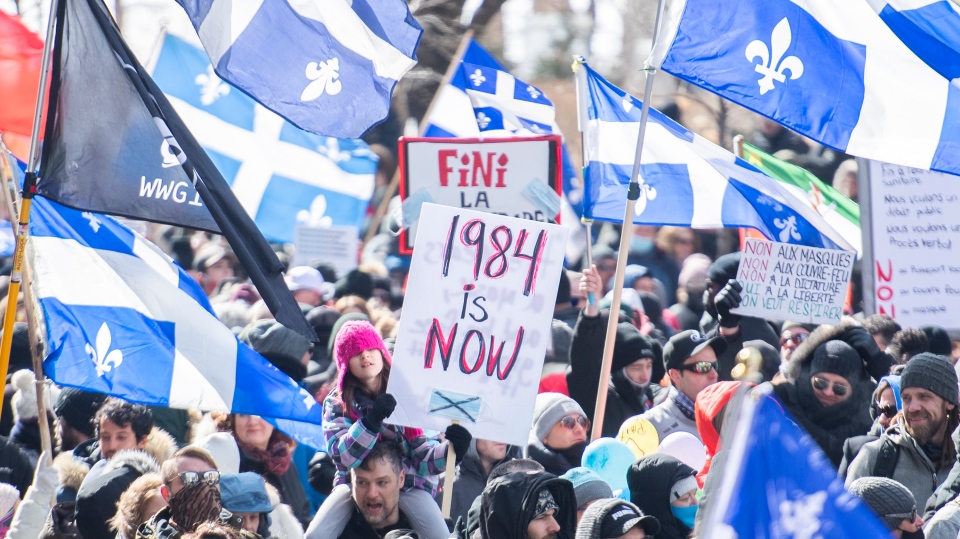 People take part in a demonstration to oppose government restrictions to curb the spread of Covid-19 in Montreal, Saturday, March 13, 2021, as the COVID-19 pandemic continues in Canada and around the world. THE CANADIAN PRESS/Graham Hughes