MONTREAL -- A few hundred young sovereigntists held a rally atop Mount Royal Friday night, making a call for Quebec independence as they marked the 50th anniversary of the War Measures Act being used in the October Crisis.

Those who took part in the rally grew up learning about the crisis in school, the use of the War Measures Act, and the discovery of the body of murdered Quebec Labour Minister Pierre Laporte.

"It's a trauma for our history for the Quebec people, and it's an important celebration because, at the same time, us, we see it as a way to celebrate independence," said Alex Valiquette of the Mouvement des Jeunes Souverainistes.

Five hundred Quebecers were arrested and detained and only 62 were charged after then prime minister Pierre Elliott Trudeau sent the army to the streets of Montreal to combat the FLQ (Front de libération du Québec) separatist group.

Le Mouvement des jeunes souverainistes wanted to remind Quebecers of what they call an "act of immense violence towards innocent citizens by the government at the time," but also that their independent Quebec would be a more inclusive one with progressive ideas.

"For social justice, for rights as a nation, and for us to have better!" said Charlotte Massue. "To be better for the environment for feminism and syndicalism and much more." 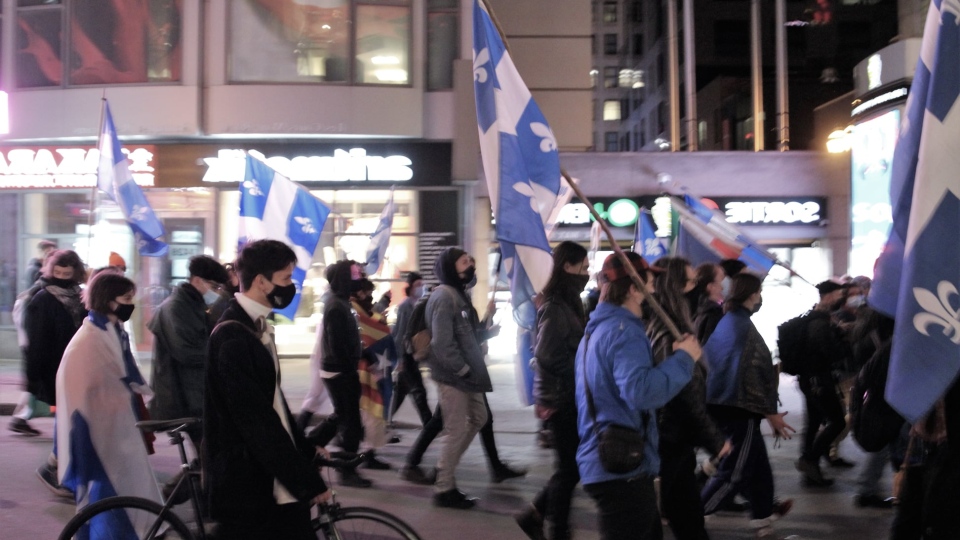 "It's our responsibility as young people to do something about everything: social justice and the climate, everything; because it's our world and we're the ones who will live in it for the longest right now, and if we don't change it, we're going to suffer," said Catherine Boulianne-Complaisance.

A generation later, the call is different but similar in many ways.

"I think we have everything to gain to have Quebec independence, and I think it would help Quebecers in all levels, financially, politically, internationally," said Valiquette. "We don't have a hate relationship with Canada. I think Canada and Quebec would be extremely good economic partners and share a lot and by being free and equal. That's what we want."