Young Quebec sovereigntists gather to march for French in Montreal

The Mouvement des Jeunes Souverainists organized the "Manifestation pour le francais" march to walk for the language writing, "every day, articles and statistics multiply on the deplorable state of French in Quebec, particularly in Montreal" on its Facebook page.

They want the Quebec government to withdraw funding to English-language CEGEP Dawson College and McGill University and divert the money to French-revival projects in addition to transforming the former Royal Victoria Hospital into an international Francophone university, enforcing Bill 101 in Montreal, forming a French-language council at the City of Montreal and realizing an independent Quebec.

"Our generation cannot afford to be a passive spectator of the decline of this common language, the French language," reads the event's description. "Today's Quebecers must fight for the sustainability of their language and for Quebec to remain an inclusive French-speaking society. We did this in 1969 with Operation McGill French and in 1977 with Bill 101; we must now continue the fight." 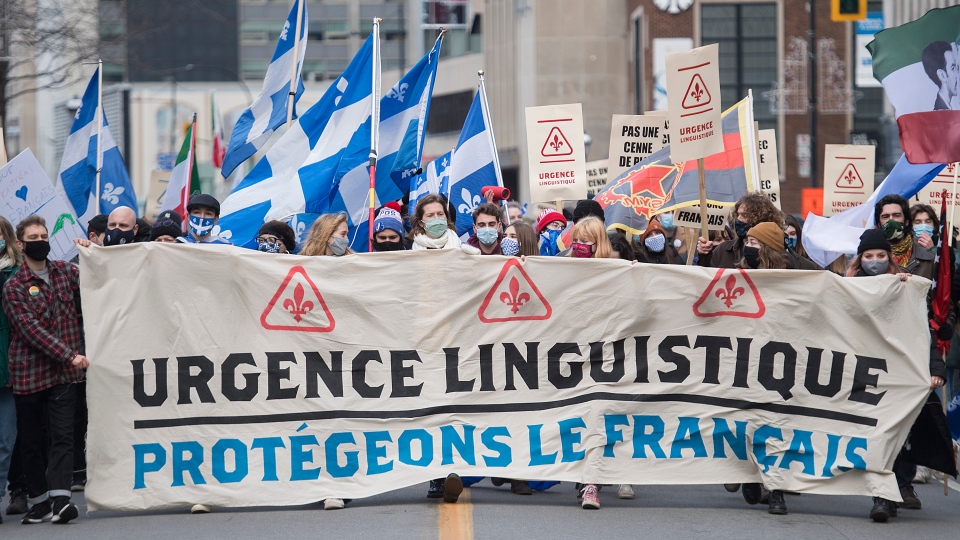 The march comes after Quebec's Minister Responsible for the French Language Simon Jolin-Barrette announced a plan to table a bill aimed at strengthening French in the province earlier in the week.

Without offering specifics, Jolin-Barrette said the objective of the bill will be to "protect, value and promote the French language."

The announcement sparked opposition from Association for Canadian Studies president Jack Jedwab who pointed out that both French and English have declined in Montreal as a mother tongue with demographics shifting due to immigration.

Protestor Esteban Carrillo said he hopes more businesses are regulated to be French-speaking first and foremost.

"The inside job is not done, and it's poorly covered by how the law is written right now," he said.

A march towards McGill University followed the gathering.