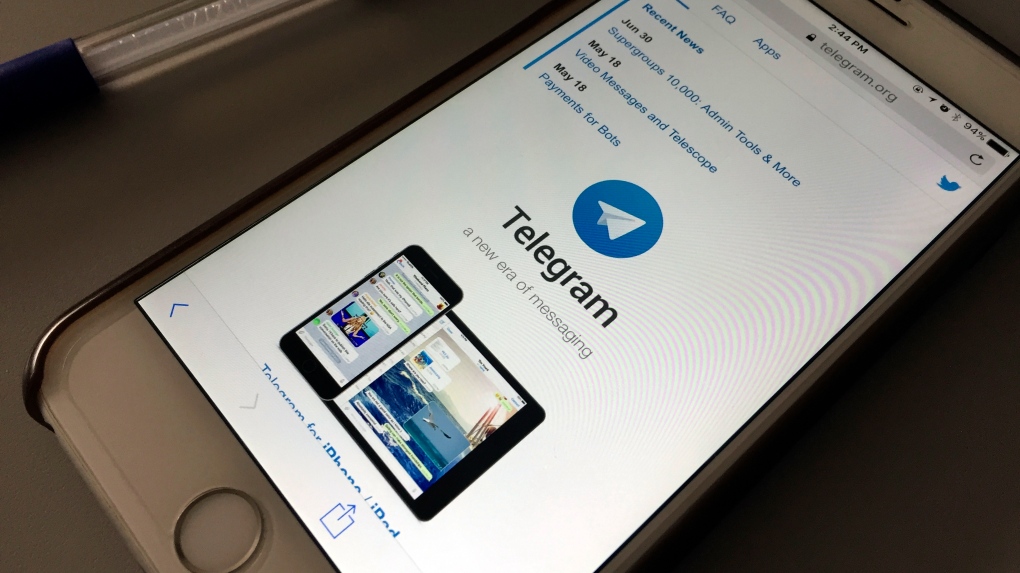 In this July 15, 2017 file photo, the messaging app Telegram is displayed on a smartphone in Bangkok, Thailand. (AP Photo, file)

"I filled out the paper, but when I saw the police officer wasn’t being cooperative, I ripped it up and left," said the 20-year-old, who went to two different police stations with her friends last week before giving up.

But many local women are reeling after learning of the group and then secretly joining it, she said, and not only at the idea that their photos could keep circulating.

"A lot of the girls are just devastated, you know? Upset, betrayed," said the young woman, who didn’t want to be identified by name to preserve her privacy.

She said that more than 5,000 explicit photos and videos were posted, including many of minors—and many of the girls whose photos were posted personally know the young men in the group through school or their social circles, she said.

"I know a few of the girls are saying, ‘Look, when school starts back, or when COVID’s not a thing again, we’re going to be around all these guys again,'" she said. 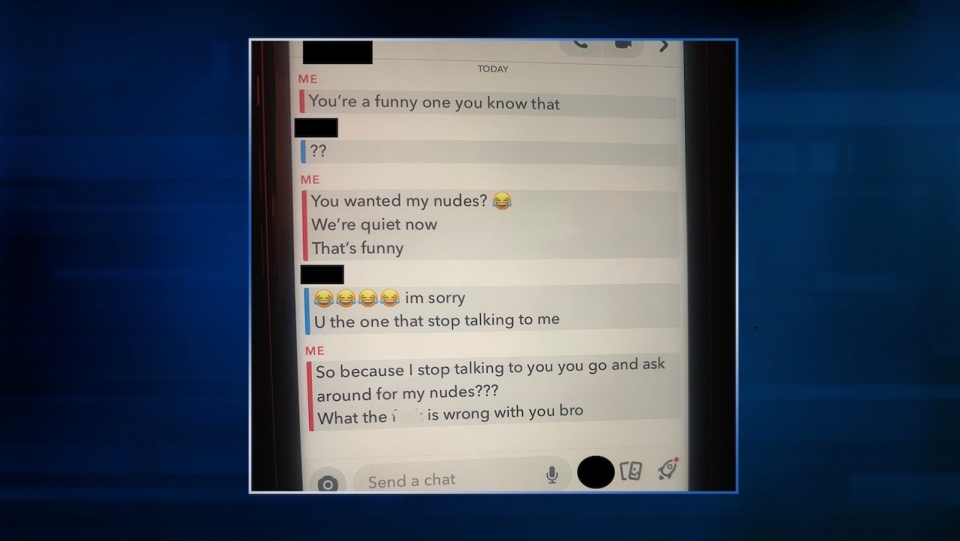 A screenshot of a private exchange where a young woman confronted a man who "requested" nude photos of her. He said he did it because she had ignored his requests for a photo. (Submitted photo)

Even if police are now investigating, "they're not going to arrest 3,000 guys?" she added.

Last week, the group had about 3,700 members, said the 20-year-old, who was one of many who secretly joined it, using pseudonyms.

It was a group that could be joined by invitation only, by sending a new member a link, and it was hosted on the encrypted messaging app, Telegram. The app is similar to Signal, much like the popular WhatsApp platform, but with arguably stronger privacy protections for the users.

The 20-year-old who spoke to CTV News said she didn’t know how the first young woman got the link and joined the group. But once she was in, she began inviting other girls to quietly join it and see what was being shared.

They realized that the young men in the group weren’t just sharing photos and videos they had, but requesting certain girls by name—either girls they had met before, or ones whose social media profiles they’d seen.

"Some of the girls, these guys actually followed on Instagram, so I don't know, maybe they just want to see them naked," she said.

For some, a boyfriend or ex-boyfriend might have old nude photos and the request would make its way to him, said the young woman.

"My friend saw a video she made with her boyfriend six years ago in the group," she said.

Seeing the requests gave the girls who were silently watching in the group a chance to alert these other girls—otherwise strangers to them—that their privacy was being violated. They would then find their social media accounts and warn them.

The majority of the victims were just "regular girls" like that, the young woman said. About 10 others were well-known social media influencers or models.

A few others, including her, have accounts with OnlyFans, a platform that allows users to take their own nude or semi-nude content and put it behind a paywall, charging their "fans" a price for access, with high control over their own settings.

For the 20-year-old, it was some of her OnlyFans photos that were shared—but she has always had her account blocked to all users in Canada. The man who requested her nudes was someone who’d repeatedly badgered her to send them to him, and whom she’d repeatedly ignored, she said.

When she confronted him, he said that he did it because she had been ignoring him. Angry, she posted a warning about him, and he reacted with a torrent of abuse, she said.

A few girls also confronted young men in the secret group, and were sent death and rape threats afterwards, she alleged.

But even for the ones who stayed silent in the group, watching the images and comments scroll by shook them deeply, she said.

"I saw my cousin and I saw myself… I started seeing my friends," she said.

In another video, "I saw one girl was unconscious and she was, like, getting her head soaked in a toilet. And yeah, and someone actually reposted it," she said.

"Why would you post that? Like, what if this girl has no idea this video is out?"

She saw one young woman confirm that the photo that appeared of her was an old one from when she was only 13.

But for her, the hardest part was reading the comments from people she knew socially, she said.

"Honestly, with having an OnlyFans, I know the risks and stuff. Like I know… they’re going to get leaked," she said.

The viciousness of the "hateful" language also surprised her, she said, from people who didn’t know the girls were present.

"These things that guys are saying about us? You know, like, in our face, they'll say, ‘Oh, you're pretty’ and stuff, and then in the group chat they're calling us whores and saying that we deserve to be raped and we deserve to die," she said.

"So I think that's really pissed me off the most."

In a statement, Montreal police said the force "would like to reiterate that the non-consensual distribution of intimate images involving minors is a serious crime, punishable by criminal charges."

They invite all people with information on the situation to call 911, go to a police station or to call the Info-Crime Montreal line.

But a small group of women held a protest on Monday night in downtown Montreal, saying their concerns weren’t being heard.

The 20-year-old said she went with three friends last Thursday, first to the downtown police station, and then to the one in Westmount.

At the first, she said no one even came out to greet them, but told them through an intercom to call a phone number. The phone receptionist told them to report it in person.

They tried the Westmount station, but the officer there didn’t seem interested, she said.

On Tuesday, police said they are "aware of the situation and an investigation is underway," and that they couldn’t comment further so "as not to interfere with the process."

A Montreal legal clinic that specializes in sexual harassment and assault said there are a few recourses available in similar situations.

The people involved can be charged with criminal harassment, extortion, or the sharing of nude photos without consent, said Virginie Maloney, the director of operations at the Juripop legal clinic.

A civil suit is also an option, she said.

However, in cases like this, "the problem is, I don't think that people who are there, they're going public with it necessarily," she said. A lot of the time, "people, they want to keep that to themselves" for fear of making the damage worse.

However, it’s also important to remember if you shared a nude photo with a single person, such as an ex-boyfriend, you know at least who had access to that photo initially, she said. So, even if people can’t prove who leaked a photo in some other forum, "they can always come back to the first person who originally has the access."