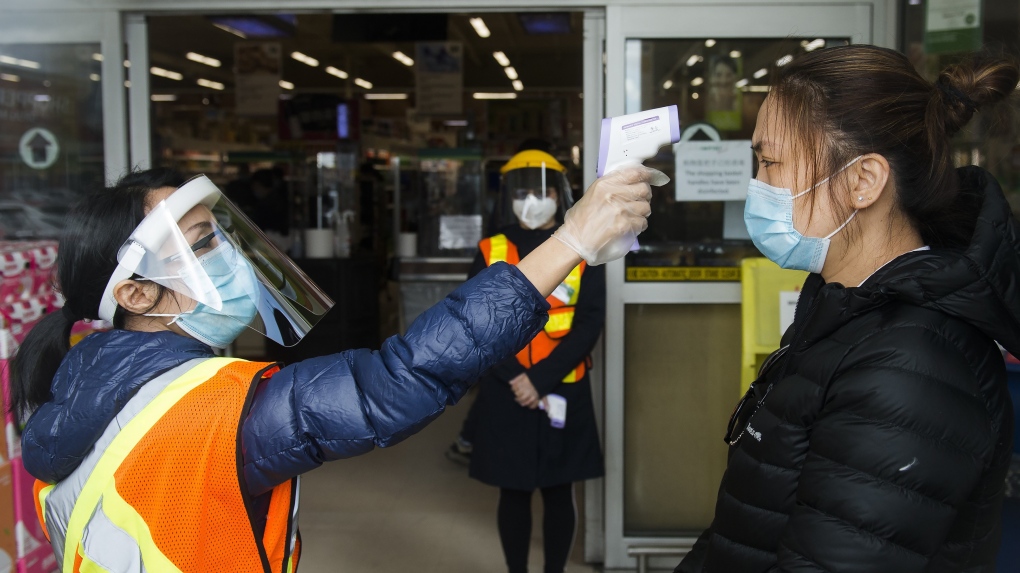 People get their temperatures tested at the T&T grocery store to help curb to spread of COVID-19 in Markham, Ont., on Monday, April 20, 2020. Temperature checks and masks are part of a handful of increased protective measures companies like Air Canada, T&T Supermarket and Longo's are launching as provinces across Canada slowly start to reopen in the middle of the pandemic. (THE CANADIAN PRESS/Nathan Denette)

MONTREAL -- After causing headaches for health authorities, COVID-19 outbreaks in Quebec workplaces decreased at the end of April, says the provincial public health institute -- and the trend seems to be continuing.

This is the first time in several weeks that the INSPQ (Institut national de santé publique du Québec) has been able to gve such a positive weekly report on the workplace situation.

It confirmed that the number of new outbreaks of COVID-19 in the workplace dropped at the end of last month, according to the most recent report on the subject, released on Tuesday, which compared the last two weeks of April.

Schools and health-care settings were excluded from the analysis.

The institute reported a 33 per cent decrease in outbreaks, which went from 326 to 218 in one week. An outbreak is officially recorded when there are two or more confirmed cases of COVID-19.

As for the total number of workplaces contending with outbreaks, it went from 678 to 561 in one week. That peak, 678, had not been seen in Quebec since January.

Overall, the two peaks of workplace outbreaks were recorded in late December and March, said Richard Martin, a scientific advisor to the INSPQ.

The most recent daily report shows 495 active outbreaks as of May 11.

The descent began in mid-April, said Martin, and it held true across "the majority of economic sectors," he said.

"The improvement continues," he said, with the combined benefits of vaccination and compliance with new health guidelines. However, despite both strengths, variants of the virus "can still come and mix things up," he said.

At the end of April, the INSPQ indicated that the situation had improved in the Quebec City region and in the Outaouais.

The economic sectors most affected by the outbreaks of more than six cases were, at the end of last month, in metal producers, lumber, clothing and textile products industries, in the food industry (slaughterhouses), grocery stores, butchers and house construction.

It's good news, however, for construction sites: at the end of April, they showed a solid decrease in the number of outbreaks and reported cases.

In May, two sectors were still causing concern: the metals industry and the food industry.

The INSPQ says it would like to point out that the work environment identified as being in an outbreak situation is not necessarily the environment in which COVID-19 is acquired.

This report by The Canadian Press was first published May 12, 2021.