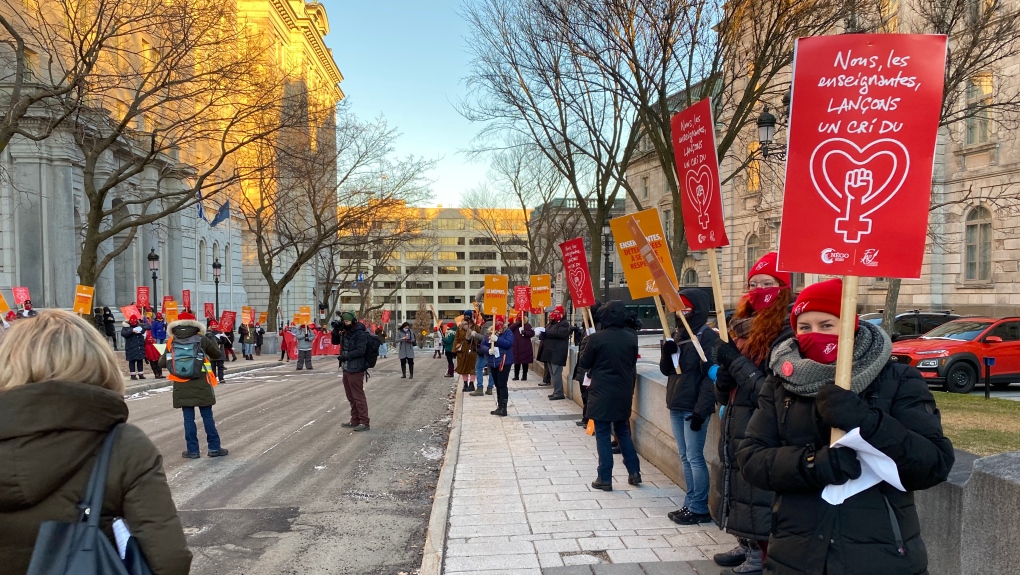 Female educators were in Quebec City protesting worsening conditions in the province's schools during the COVID-19 pandemic.

MONTREAL -- Teachers gathered in front of the National Assembly in Quebec City this morning, crowding the intersection of the Jacques-Parizeau and des Parlementaires Sts. in a protest against the worsening working conditions faced by women in education this year.

The COVID-19 pandemic is one of the concerns the Fédération autonome de l’enseignement (FAE) wants addressed by the provincial government, as a speaker pointed out this morning that 75 per cent of teachers are women and that much of the burden of dealing with the ongoing health crisis in schools has fallen on them without much help from the government.

Last month, when schools had become the source of almost 30 per cent of Quebec’s COVID-19 outbreaks, the union group pressed the provincial government to institute a screening process in schools.

With COVID-19 test results coming slowly, the FAE wanted the government to adopt a more pro-active stance rather than waiting to respond to outbreaks.

Not every decision from the government has been met with pushback, as the FAE approved of its decision to slightly extend winter holidays and use remote learning to make up for lost time, but no screening and tracing policy has been implemented in Quebec schools yet.

This was not the first disagreement the FAE has had with the government, however, and it was not the first they have pushed back against. Earlier this year, the FAE went to the Quebec Superior Court to challenge a law on income salary equity that caused long delays in getting employers to address salary inequality among their employees.

Under this law, employers were only obligated to check in on gender equality in salaries once every five years. Additionally, they were allowed to spread out the payment of the owed difference to female employees over a period of four year.

This meant that a woman in education who did not have her salary increased along with a male colleague’s could be made to wait as much as nine years before seeing her full due payment.

This recurring theme of the provincial government’s lack of attention to issues that affect teachers – and particularly female teachers – became the driving force behind today’s feminist mobilization in front of the National Assembly.

The FAE is a union group which represents almost 49,000 teachers in seven regions of Quebec, who gathered from across the province to highlight how a pattern of inaction from the government is compounding several issues this year that disproportionately affect women working in education.