MONTREAL -- Montreal's transit authority says it “reacted promptly” when it learned that one of its bus drivers had been sending “inacceptable” messages to a Black Montreal woman on Facebook.

But the woman says she wants to know exactly what was done about the man, who told her, among other things, to “bow down at my feet.”

Alima Henri argues that people who serve in public jobs should be held to a higher standard.

The incident began last week, when Henri was doing what a lot of people were doing—having an online discussion, through social media, about racism.

But things took a strange and upsetting turn. She says a man she didn’t know began to send her private messages in response to a post she had shared. The messages weren't racist at first, she says, but became increasingly disturbing – and he didn’t stop for two days.

At first, “he was saying there’s no issue with racism, and that I should stop saying racism [is] everywhere,” she says.

She responded to him that as a Black woman in Montreal, she had experienced it herself.

“I'm not saying it’s everywhere,” she told him, “but I'm saying it's still an issue and there’s still things we can do to fix that.”

As he kept messaging her, she kept responding, seeing it as an opportunity to educate someone.

“Anyone that comes to me about racism, and who’s like ‘Oh, let's discuss about it,’ I'm open to talk about it,” she said.

What also bothered her was that his Facebook profile, which has now been deleted, said he was a bus driver with the STM.

The man argued to her that it should be okay for anyone to say the N-word, if Black people can say it to one another.

Finally, he wrote that “You’re my new disciple” and told Henri to “bow down at my feet.” 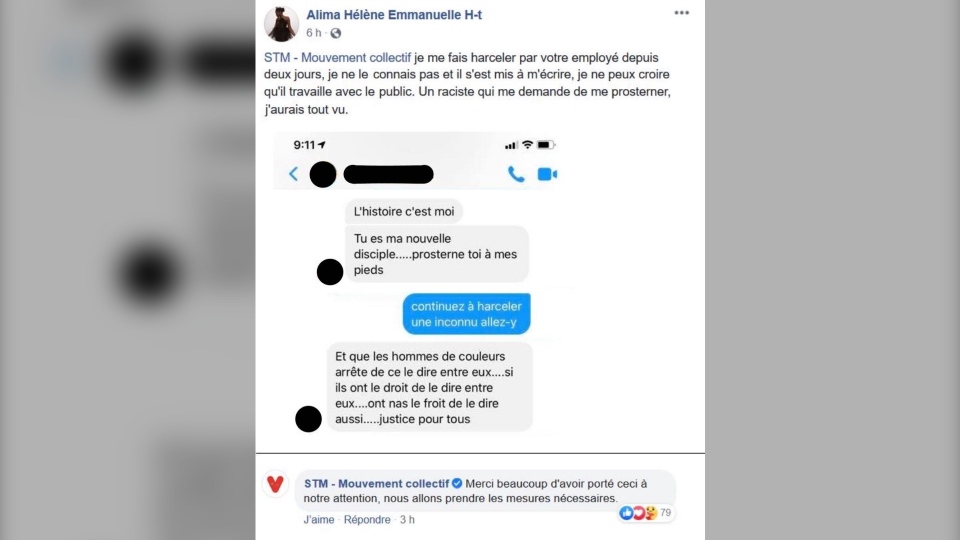 That was when Henri blocked him. She also filed a complaint with the STM and posted images of the exchange publicly.

The transit agency told CTV it was aware of the incident.

“The STM reacted promptly when we were first informed of the situation and immediately began investigating, since these messages are innapropriate and inacceptable and do not reflect in any way the STM’s values of diversity and inclusion,” the agency said in a statement.

“The appropriate measures have been taken regarding the employee’s actions, but we will not disclose details since it’s confidential information.”

Henri says the public should be told if the man is still driving a city bus.

“When…you work for the public, and you decide to show on your [social media] platform everywhere that you work for a certain company and with the public,” she says, the standards should be different.

Henri says she decided to share her story with CTV News when she was told, by other women, that the driver had harrassed them when he worked elsewhere.