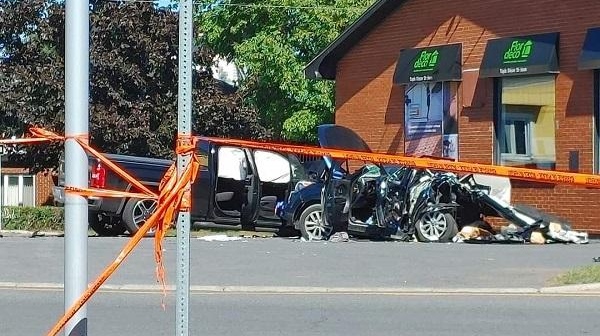 MONTREAL -- A woman and two young teenagers lost their lives Sunday afternoon in Saint-Jean-sur-Richelieu when an SUV vehicle violently struck their car, which was stopped at a red light.

The Sûreté du Québec (SQ) confirmed that the car was pushed "several meters into the parking lot of a business."

The three occupants of the vehicle were transported to hospital but could not be saved.

The driver of the Kia Soul that was struck was a 42-year-old ER nurse from the Haut-Richelieu Hospital Karine Cloutier, who died with her 15-year-old boy and 13-year-old girl.

The event occurred at approximately 10:35 a.m. at the intersection of Saint-Luc Blvd. and Du Séminaire Blvd. when the SUV struck the stationary car from behind at high speed.

The driver, a 65-year-old man, will be interviewed by SQ investigators. He was transported to a hospital for minor injuries.

The SQ's major investigations unit has taken over the case, even though Saint-Jean-sur-Richelieu has its own police force. Scene reconstruction experts were dispatched to the site.

The SQ says alcohol was not a factor in this event.

--This report was first published in French by The Canadian Press on Sept. 19, 2021.