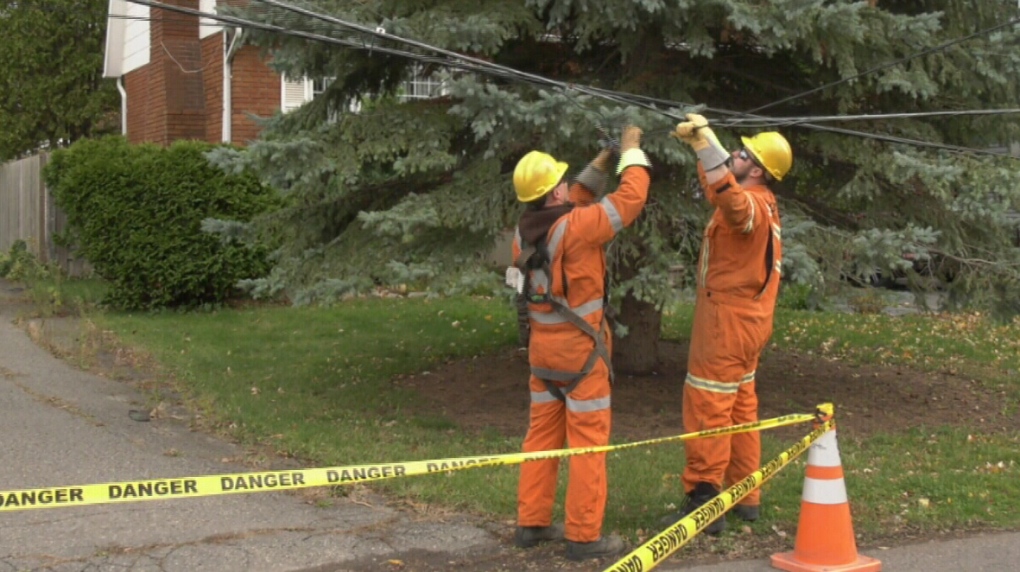 MONTREAL -- Hydro-Quebec is testing various technologies to withstand more extreme weather conditions in the province, but burying cables underground isn't the solution – yet.

"Clearly, the weather has been different in the last two years. We've observed that," said Hydro-Quebec president and CEO Eric Martel at a news conference in Montreal Monday.

Martel, who was offering a progress update after nearly 1 million Quebecers lost power due to strong winds on Friday, said the utility "has a lot going on" at its research institute, IREQ.

"We've been working on this for the last 20 years in terms of the high-voltage transmission systems after the learnings from the ice storm in 1998," he said.

The IREQ team is made up of about 500 scientists, technicians, engineers and specialists who test everything from electricity generation to consumption in its two laboratories in Varennes and Shawinigan.

Martel said the team has been working heavily to improve its distribution network over the last four years.

"We're testing right now the way we're cutting the trees, the way we're putting new gating on the cables. We're thinking about redesigning the way the posts are designed," said Martel, adding that they're in a "testing mode for some of those improvements."

Why doesn't Hydro-Quebec just bury the cables underground and shield them from the harsh elements? It's not as easy as it sounds, says Martel.

"Everybody thinks it's going to solve everything, but it's not. There are a lot of other downsides when you bury the cable. It's not a fair assumption to believe we won't have any. We will still have outages and clearly we have to be mindful of that," he said.

Cost is also an important factor.

"Burying everything would be very expensive. The whole value of Hydro-Quebec today, in our books, is about $80 billion. Burying the cables will be more than $100 (billion)," he said. "Clearly this is a lot of money, and we wouldn't get the benefit for all that money."

"Technology will evolve. Maybe in five years the answer will be different, but at this stage, that's where we are," he said.