What did Quebecers search for on Google this year? Sports, mostly, and the climate crisis

MONTREAL -- Quebecers were most interested in finding out more about sports and the global climate crisis, according to data released by Google as part of its annual ‘Year in Search’ report.

“These results are from an annual analysis of billions of Google searches around the world,” the search engine noted. “This year, the most popular searches shone a spotlight on champions and influential figures.”

Sports stories topped the most-searched list, attracting attention not only in Quebec, but across Canada.

On the international scene, all eyes were on the fire at the Notre-Dame Cathedral in Paris, France, which prompted Quebecers to take to social media to share their memories of this historic site as it went up in flames.

Of course, Quebecers also searched for information about what's happening in their neighbourhoods -- from Hydro-Quebec power outages to snowstorm updates and school closures.

Here are the Top 10 searches Quebecers made on Google this past year:

Data also shows that, in 2019, Canadians as a whole took to supporting the #WeTheNorth and #SheTheNorth movements.

People wanted to know Bianca Andreescu's rank in the standings as she made a meteoric rise after defeating Serena Williams at the Rogers Cup and the US Open. 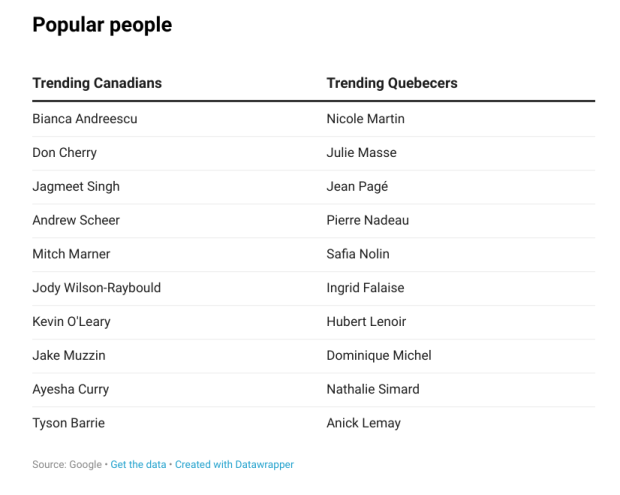 Over the last 10 years, people have searched more and more about the climate crisis -- perhaps, Google officials muse, as the world prepares to turn the page on a new decade.

“Quebecers wanted to learn about climate change four times more than in 2015,” the search engine stated. "’Why is the Amazon burning?’ was one of the most frequently asked questions.”

Google releases its annual Year in Search data for countries around the world at the end of every year.