Weekend traffic: Expect road and ramp closures between the Turcot and Saint-Pierre interchanges 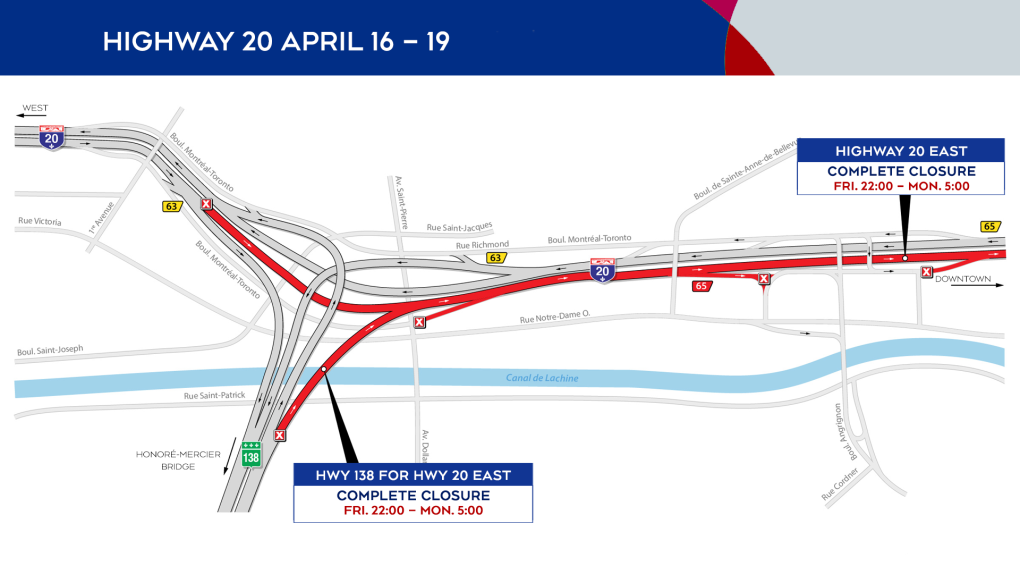 MONTREAL -- Those planning on getting in their vehicles this weekend should note that major roadwork is planned for Highway 20 East, as well as in the Saint-Pierre and Turcot interchanges.

It is advised to avoid these areas.

Highway 20 East between the Saint-Pierre interchange at the Route-138 exit (63) and the Turcot.

The Bonaventure Highway (A-10) East is closed (towards the Samuel-De Champlain Bridge) between Wellington St. and the Carrie-Derick St. entrance and the A-10 West (towards downtown) between the Pierre-Dupuy Ave. exit (2) and Wellington St., from Friday at 9:30 p.m. to Saturday at 9 a.m.

Only one lane is available in each direction (opposite direction on the roadway towards the east) on the Bonaventure Highway (A-10) between Wellington St. and the Victoria Bridge from Saturday at 9 a.m. to Monday at 5 a.m.

One of two lanes are closed for an indefinite period on the Highway 20 West ramp (exit 63) to Route-138 West (towards the Mercier Bridge).