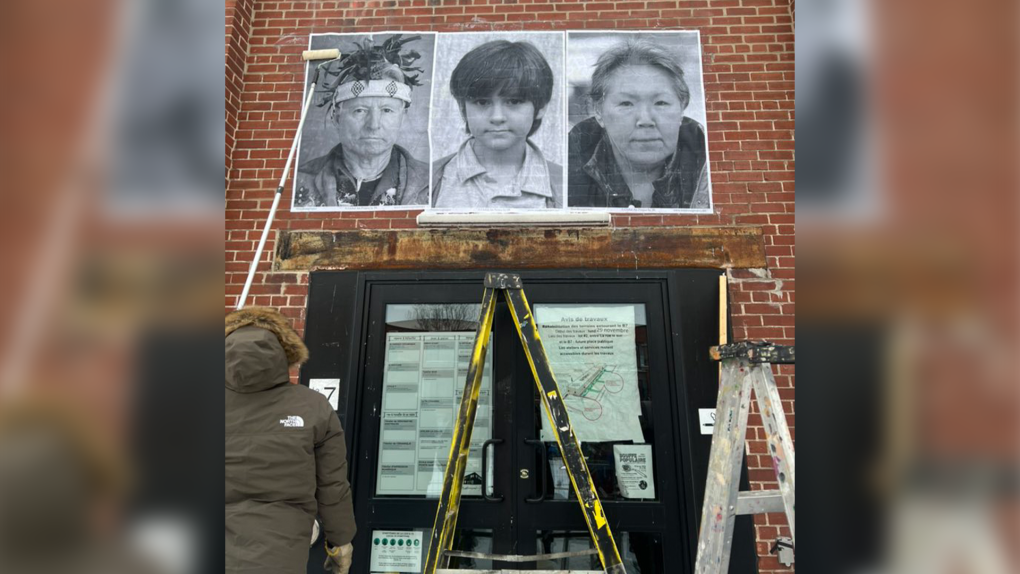 Portraits on Indigenous residents are seen plastered on the side of 1900 Rue le Ber in Montreal on Sunday, Feb. 20, 2021, as part of the Indigenous Forced Displacement project. (Image courtesy of Nakuset)
Montreal -

Large portrait-style posters of members of the local Indigenous community were plastered to Montreal walls Sunday to draw attention to Canada's colonial history and the displacement of Indigenous people.

"It's really important that people see, that after everything we've been through, we're still here, and we're still thriving," said Nakuset, leader of the Indigenous Forced Displacement project, which kicked off on Sunday.

The installation is part of the worldwide Inside Out project, founded by renowned French photographer and street artist JR, which encourages participating groups to display large, public portraits of local community members.

So far, there are local projects in 138 countries around the world, amounting to more than 442,209 portraits.

In Montreal, the first posters found their venue at Bâtiment 7, located at 1900 Rue le Ber in Pointe-Saint-Charles.

First group of photos are up for Indigenous Forced Displacement🥰 pic.twitter.com/Hn5luiUuoa

Other donated surfaces include 5795 de Gaspé Ave., in Little Italy, 633 Beaumont St., in Park Extension, and 7010 Henri Julien Ave., in the city's east end. Those spots are set to be postered through Monday.

"The whole idea is that it has to have a message, to provoke change," said Nakuset. "As Indigenous people, Canada was all ours. Now, we're on tiny little reserves, we're moving into cities, we're losing our safe spaces."

About 50 people were photographed for the project.

"We're looking for different buildings," said Nakuset, adding that anyone with property who's interested in getting involved can donate their space.