Wayward seal spotted near Montreal, more than 1,000 kilometres from its natural habitat 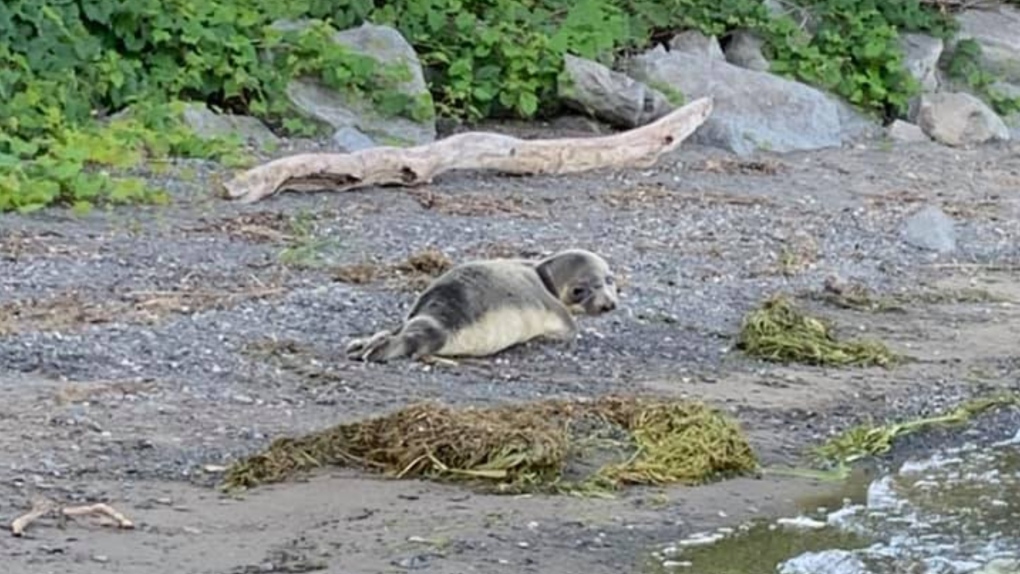 The wayward seal was spotted in Boucherville (photo: Facebook/Mathieu Poissant)

NEWS -- A small hooded seal was spotted lounging on the shore of Boucherville on the South Shore of Montreal Thursday morning, more than 1,000 kilometres from its natural habitat.

A passerby took photos and video of the seal, which is likely only a a few months old, and promptly called the Quebec Marine Mammal Emergency Network (QMMEN).

It turns out, the network had already been tracking the seal, which had been hanging around a marina on Ile Saint-Helene since July 24.

Muller said early Thursday morning, a team of veterinarians from Universite de Montreal was on its way to assess the seal’s health. Volunteers had noticed it was losing weight, and appeared to have an eye infection.

When the veterinarians arrived at the marina, the seal was gone. Muller says within minutes, the QMMEN received a call that the seal was now in Boucherville.

However, the little seal appeared to be on the move, and managed to evade its medical checkup once again. By the time the team arrived in Boucherville, all that remained were traces of the seal’s body in the sand.

An hour later, another call came in, placing the seal in Sorel-Tracy.

"So the seal seems to be back on its way to its habitat, that's what we hope, but it might go back to Montreal later today, we don't know," said Muller.

She said it's normal to find a young seal by itself this time of year, but usually they would be in the sourthern part of the Gulf of the Saint Lawrence, past the Gaspe Peninsula, and closer to the Atlantic Ocean. Montreal is a long way from home for any hooded seal.

"It’s always an unusual site, but it happens every year and most of the time, more than once," said Muller, adding that several others were spotted in the Montreal area so far this year.

There are many reasons for a hooded seal to end up far off its course, according to Muller. She said it could have a disease, be disoriented, or it could be trying to find a new habitat where there’s less competition to find food. It also could be a navigation error that brought it there.

In May, a humpback whale was spotted over several days in the Saint Lawrence RIver near the Jacques-Cartier Bridge. It ended up dying after it was struck by a boat, and its body was removed from the river on June 9.

Muller is hopeful the seal will have a better chance of surviving and says the QMMEN will be following its progress as it makes its way home.

The group is asking boaters to be aware that a young seal is on the water, because marine traffic is probably the biggest threat to its safety.

"If the seal is on land it’s really important to stay away as much as you can because when a seal is on land it needs to rest, so for that we need to keep our distance at least 50 meters but if you can take 100 metres that’s even better.”

She warned it's also important to keep dogs on a leash, because seals can transmit disease to other animals, and adds it's important not to touch or feed the seal.

"It really needs to keep feeding on fresh fish by itself," she said. "It's really important to leave the seal alone, even though it's cute and you want to help, the best way to help is to enjoy the site but from a distance."