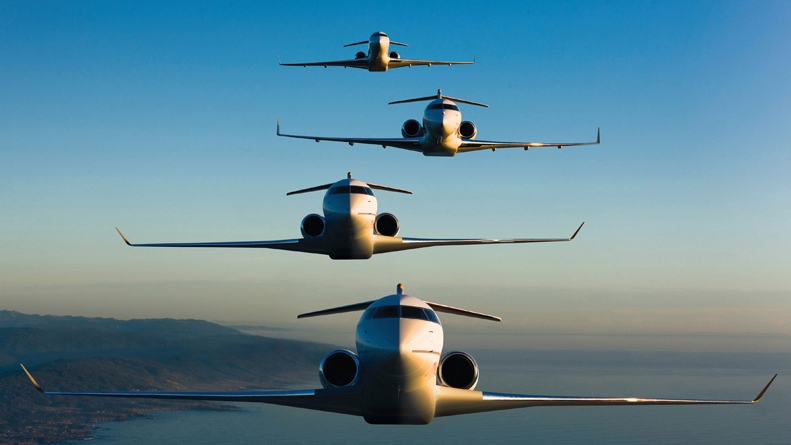 Bombardier Global series aircrafts are shown in a photo released by the company on Saturday June 30, 2012. (Bombardier / Paul Bowen)

MONTREAL -- Bombardier's corporate jet business could get a lift after VistaJet said it is expanding its aircraft purchases due to growing customer demand during the COVID-19 pandemic.

The Malta-based company will add up to 12 Global 7500 aircraft and 10 Challenger 350s over the next two years to grow its fleet to more than 90 aircraft.

It has taken delivery of the first two long-range Global planes and has been identified as the Challenger customer announced in December that was one of the largest get orders or 2020.

VistaJet, which sells use of its planes on an hourly basis, says the fleet expansion reflects "huge demand" from new corporations seeking "safer, more reliable and efficient" travel.

"The pandemic is clearly demonstrating that customers are increasingly requiring guaranteed global access 24/7," the company said in a news release.

It claims to have seen a surge of nearly 50 per cent in corporate interest globally since last July. Flight hours sold increased 23 per cent in the first quarter compared with a year earlier and new program members surged 90 per cent.

In addition to the new orders, VistaJet plans to upgrade its entire Challenger 850 fleet, Challenger 605s, Challenger 350s and Global 6000s with updated technology and interiors.

"We remain committed to providing critical support to businesses in this new world -- we kept our business steady during 2020 and we are seeing much increased demand for VistaJet's asset-free solutions in 2021 and beyond," stated chairman and founder Thomas Flohr.

Industry analyst Walter Spracklin of RBC Capital Markets says VistaJets commentary and data reinforce the view that the pandemic has unlocked elevated demand for business jets from customers looking for safer and more reliable means of air travel in the current environment.

"We believe that Bombardier is ideally positioned to capitalize on this growing trend going forward," he wrote in a report.

Bombardier has focused on its business jet line after selling its railway, commercial aircraft and aerostructures businesses.

Last month, Bombardier said its net debt was about US$4.7 billion, which includes US$3.6 billion of net proceeds from the sale of Bombardier Transportation.

Chief executive Eric Martel said that while it will take "several years" to return to pre-pandemic levels, Bombardier plans to capitalize on growth of after-sales service to achieve its goal of US$7.5 billion in sales in 2025.

The Quebec aircraft manufacturer also said it expects to be free-cash-flow positive next year and generate more than US$500 million by 2025.

Its operating profit is expected to reach US$1.5 billion while the adjusted operating margin target has been set at 20 per cent.

"We know exactly where we are and (our model) is more and more predictable," he said during an investor presentation.

In February, Bombardier announced the elimination of 1,600 jobs and the end of production of the Learjet family by the end of the year. These measures are part of a plan to save US$400 million annually by 2023.

- This report by The Canadian Press was first published April 6, 2021.