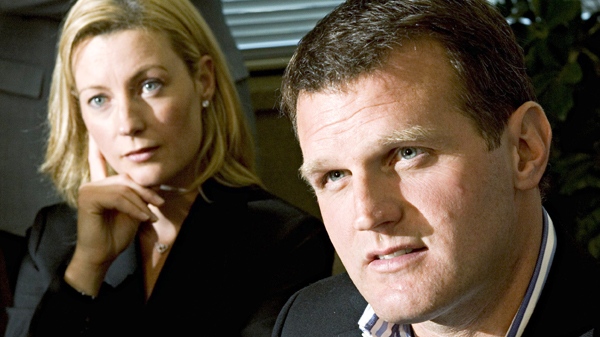 Vincent Damphousse speaks during his retirement announcement as his wife Allana listens, during a news conference in Laval, Que., on Sept. 7, 2005. (Paul Chiasson / THE CANADIAN PRESS)

MONTREAL - Former NHL star Vincent Damphousse sat down with a Crown prosecutor on Tuesday to discuss the criminal case against his estranged wife.

Allana Henderson faces one count of theft and one of assaulting Damphousse with a weapon. The offences allegedly occurred last March.

But Damphousse is also facing six counts of assault against the 40-year-old Henderson stemming from incidents that allegedly occurred between 2008 and early 2011.

Carolyne Paquin, the Crown prosecutor who is handling the case against Henderson, met privately for about 90 minutes with Damphousse.

"He was really calm and obviously he wants the charges to end at some point," Paquin told reporters.

She said it is possible there could be a settlement by the time Henderson is due back in court on Nov. 29, when her trial date is scheduled to be set.

"At this point, there are some negotiations, but I cannot give you details about that," Paquin said.

"At this point we're going to postpone the case to see what happens in the case of Mr. Damphousse and maybe on the 29th of November, we're going to set a date for a trial or we're gonna have a settlement."

Damphousse, 43, did not talk with reporters when he left the courtroom with his lawyer.

Henderson was not in court.

Damphousse is required to return to court Oct. 11 in the alleged case of conjugal violence against him.

Both Damphousse and Henderson have pleaded not guilty to all charges.