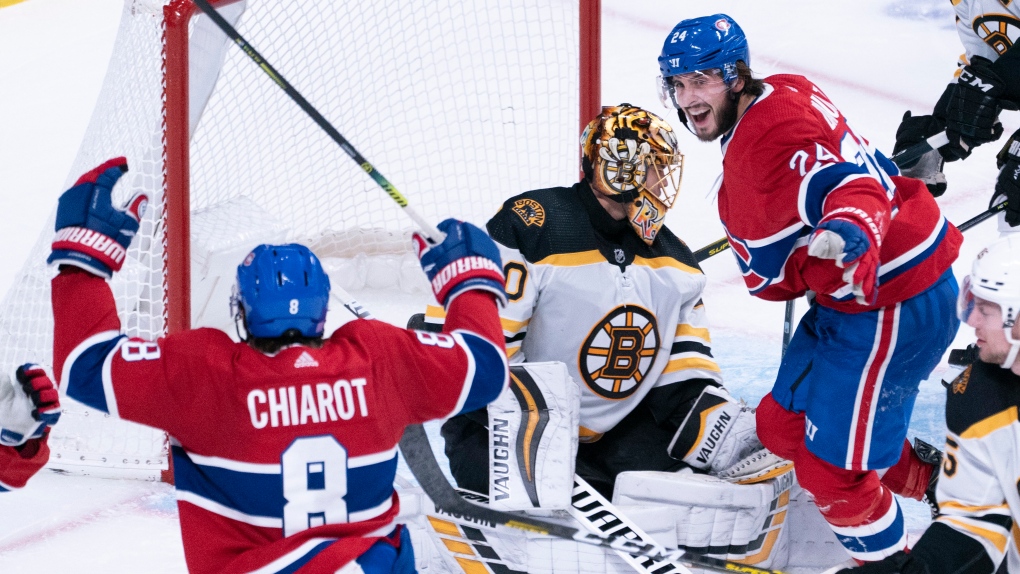 Tomas Tatar, Paul Byron and Ben Chiarot, with the third-period winner, also scored for the Canadiens (8-5-2), who have won four of their last five games. Jeff Petry had two assists.

David Pastrnak, Connor Clifton, Anders Bjork and Sean Kuraly scored for the Bruins (11-2-2), who saw their six-game win streak come to an end.

It was hardly a goaltending battle, with Carey Price stopping 21-of-25 shots while Tuukka Rask gave up five goals on 31 shots.

The Canadiens took a 4-3 lead into the third period but Boston overcame its third deficit of the game when Kuraly surprised Price on a wraparound at 3:03.

Chiarot gave Montreal the win with a wrist shot from the heart of the face-off circle at 9:06, just minutes after the Bruins had a goal overturned for offside.

Boston came into the game with one regulation loss all season -- Oct. 10 in Colorado against the Avalanche.

The Bruins were playing the second game of a back-to-back set and it showed, going down 3-1 in the first period.

A faster Canadiens team was rewarded just 1:13 into the game when Mete, with a well-timed pinch, fired Petry's rebound under Rask's glove for his second goal of the season.

Pastrnak netted the equalizer six seconds into a Boston power play, a one-timer from the half wall at 14:55. Pastrnak, the NHL scoring leader, extended his career-high point streak to 13 games.

Montreal was right back in it two minutes later. A clever breakout pass by Brendan Gallagher led to a 2-on-1, with Tatar shooting off the post and in.

After Artturi Lehkonen forced a turnover, Byron went five-hole on Rask to make it 3-1 for the Canadiens at 17:16 with his first goal of the year.

The Bruins clawed their way back in the second period through Clifton and Bjork.

The Canadiens failed to clear their zone and Clifton made them pay with his first NHL goal at 7:17, top shelf on Boston's first shot of the period to make it 3-2.

The visitors levelled the score at 18:13 when Bjork was first on a loose puck in the crease, before Mete gave Montreal the 4-3 lead 42 seconds later with a shot from the point.

It was an evening of milestones for both teams.

Montreal's Claude Julien coached his 1,200th NHL game while Bruins captain Zdeno Chara played his 1,500th game. Bell Centre fans gave Chara, who is usually booed in Montreal, a rare ovation for the accomplishment. The 42-year-old is the 21st player to reach that mark.

This report by The Canadian Press was first published Nov. 5, 2019.