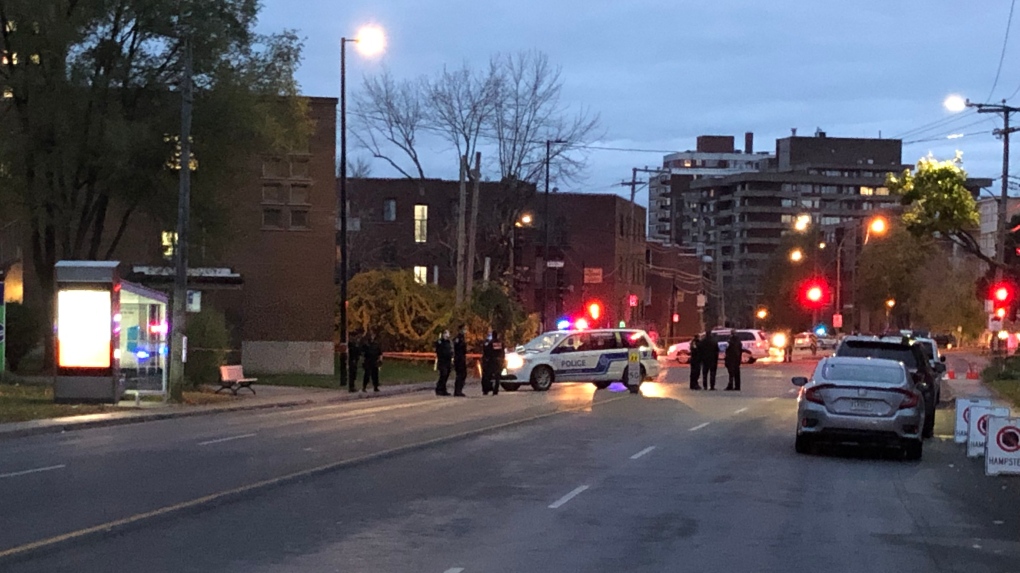 Quebec's police watchdog (the BEI) is investigating the SPVM after Montreal police officers shot and killed a man Oct. 29, 2020.

MONTREAL -- Montreal police are under investigation by the civilian watchdog after shooting and killing a man who was wielding a knife in NDG early Thursday.

On Friday, the Quebec coroner's office identified the victim as Sheffield Matthews, age 41. They said he was  from Montreal.

Police answered the call shortly before 6 a.m. The BEI, the agency that investigates serious injuries involving police, said they found a man who was in crisis.

The agency said that according to their preliminary information, the man came towards the holding a knife while police stayed in their vehicle.

“What we’re told is the man then headed towards a second vehicle where there was a civilian,” said Guy Lapointe Jr., who heads the BEI.

“Officers then stepped out of the vehicle to intervene, at which point the individual apparently turned around and charged the officers, or at least [came] towards them in a menacing manner.”

Police shot the man, who was transported to hospital but died.

The BEI says the man is believed to be in his 40s. He is Black.

NDG-Cote-des-Neiges mayor Sue Montgomery said in a statement late Thursday that the death was part of a long history of police shootings of Black men and that her “heart is aching.”

“Over thirty years ago, unarmed black teenager Anthony Griffin was shot in the head in NDG,” she wrote.

“Since then, there have been several more deaths at the hands of police. In 2018, we saw another young black man shot dead by police in NDG. His name was Nicholas Gibbs.”

Eight investigators from the BEI and Quebec provincial police are looking into the death.

Experts say there are various ways police can respond to someone in crisis.

“This is a situation to be de-escalated calmly, patiently,” said James Hughes, the CEO of the Old Brewery Mission.

“If this has to take hours let it take hours. Let it be resolved without injury, let alone a mortality.”

But he said people shouldn’t jump to conclusions before the investigation is complete.

“We just got on the scene this morning,” said Lapointe on Thursday.

“A lot of things need to be checked again, coming back to the same thing—ascertain what the sequence of events of was, exactly how things went down.”

In her statement, Montgomery also called for the reopening of NDG’s police station.

Watch the video above for CTV's full television report.