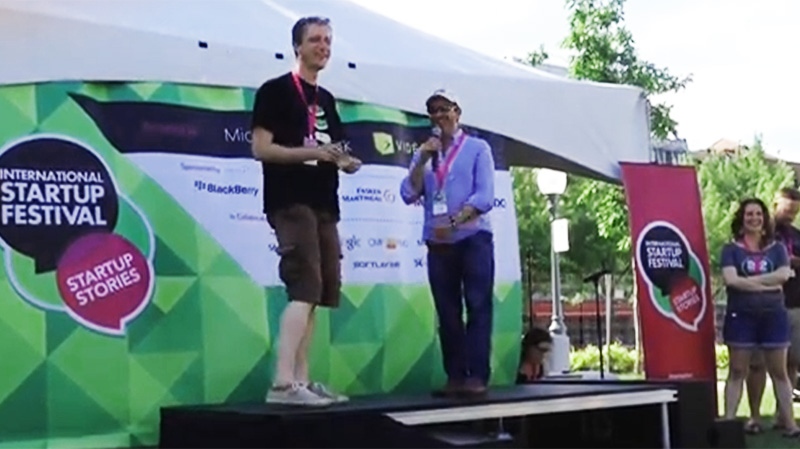 Jason Bailey, seen here in a screen grab image from a video posted to YouTube by VidRack.com, impressed judges with his method of monetizing online games.

A coveted $80,000 cash prize at Montreal’s Startup Festival has been awarded to veteran entrepreneur Jason Bailey, whose L33dr.ly project has been described as a method for game developers to monetize their games.

Bailey had been keeping details of the pitch under wraps for some time – and his site remains inoperative - but the substance of his pitch was enough to not only win the prize, he also reported that he raised nearly $500,000 from a variety of sources over two days.

When awarded the prize, Bailey explained that investors are lining up to get in on his project, which he promised to rename.

“Having come to this festival with nothing, with nobody knowing my story I’ve been able to tell it here and through the process of doing that, I've been able to raise almost half a million dollars literally in two days and that is a phenomenal thing to happen,” he said.

Bailey also confessed that as an investor, he hasn't always been very supportive to those pitching their projects his way. “I’m kind of a dick and I’m really sorry,” he said.

The prize, handed out by a panel of 13 judges, also comes with other perks, such as free office space, professional branding help and support from a special startup program.

The other two finalists were Snoobe, an app which helps consumers keep their wireless internet costs down and SoberSmart, a breathalyzer attachment for smart phones.

The third annual Startup Fest, which kicked off Wednesday, was slated to end Saturday.