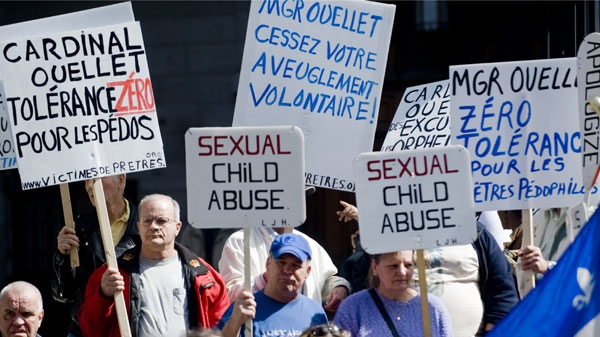 Members of the Duplessis Orphans group demonstrate outside the Notre Dame Basilica in Montreal, Friday, April 2, 2010. (THE CANADIAN PRESS/Graham Hughes)

MONTREAL - For the first time, the Vatican has vowed to study the Duplessis Orphans case.

In a letter signed by Sr. Enrica Rosanna, FMA Undersecretary, the Vatican responded to a lawyer's letter, explaining that the complaint is "presently being studied" by the "Congregation of Institutes of Consecrated Life and Societies of Apostolic Life."

The note came as response to a lawyer's letter sent to the Vatican in April. That note detailed the youthful sufferings of 83 of the orphans.

The victims were orphans sent by the Catholic Church to live in a variety of often inappropriate conditions, including the living in insane asylums. The events spanned several decades.

Under the leadership of now-deceased leader Bruno Roy, the Duplessis Orphans Committee agreed to PQ government offer of a $10,000 lump sum and $1,000 per year under the control of the orphanage.

Many of the orphans angrily denounced that 2001 settlement, which offered a sum far less than those made to victims of similar situations.