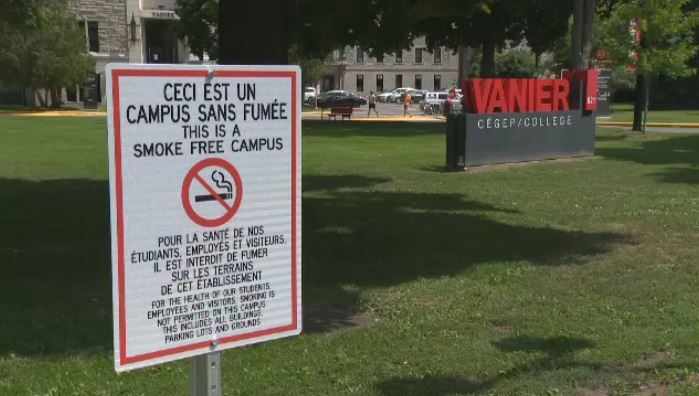 The school says anyone who’s caught smoking on campus will be given a verbal warning, and repeat offenders could face disciplinary action. (CTV Montreal)

Vanier College in St. Laurent has banned all smoking and vaping on its campus.

The ban also includes the use of marijuana - this means students and teachers wanting to smoke will now have to leave school grounds.

Vanier has decided to follow Dawson and CEGEP St. Laurent as one of the few with an outright ban.

The college has already banned the sale of fried food and sugary drinks on campus – and some people have complained online they don’t like the latest smoking ban.

The hope is, however, that if students aren’t surrounded by smokers, they’ll be less likely to light up.

The CEGEP's director of communications said a consultation among the campus community - a total of 4,000 respondents - showed 64 per cent were in favour of banning smoking on campus.

"We figure that gave is the moral authority to act as we did," Darren Becker said.

“Smoking is not a choice, smoking is an addiction,” said Adrian Gould, a health promotion consultant. “Ninety per cent of people who started smoking started before 18, so we’re talking about prevention, and it has to start with youth.”

“Youth are on our campuses, in our universities, and in our high schools,” he added.

The school says anyone who’s caught smoking on campus will be given a verbal warning, and repeat offenders could face disciplinary action.