Union suspends strike for SAQ workers until November 29 at 5 a.m. 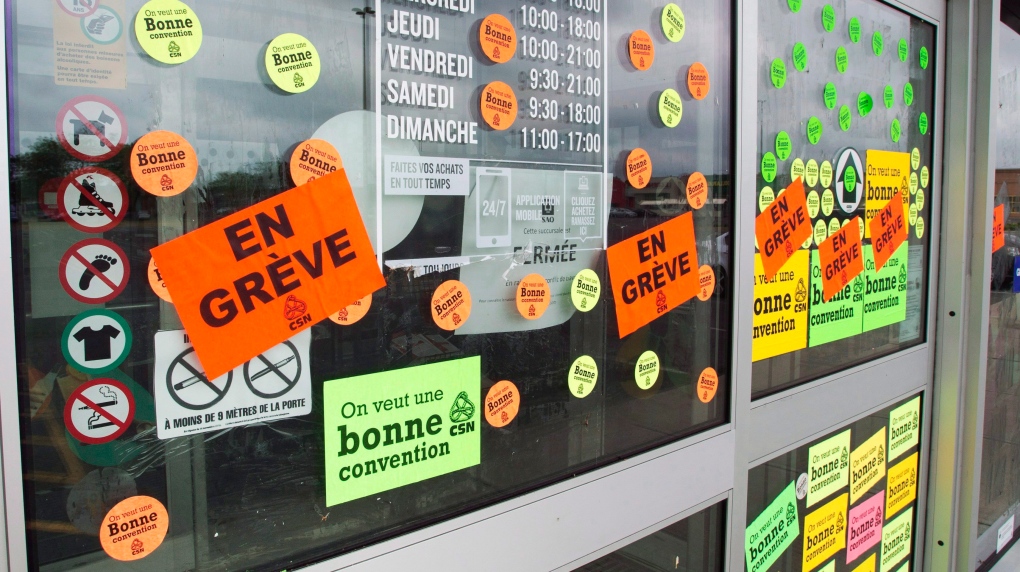 The union of striking SAQ employees is announcing a truce and suspending the strike until Monday, Nov. 29 at 5 a.m.

The Canadian Union of Public Employees (CUPE) made the announcement Tuesday evening in a news release.

The union and Liquor Corporation management were in negotiations Tuesday as the walkout by the 800 warehouse workers was in its second consecutive day.

"We don't want to hold SAQ customers hostage and since we are finally seeing some progress at the bargaining table, we agree to suspend the strike for a few days to give the talks a last chance," said CUPE union advisor Michel Gratton in the release. "The employees will therefore be back at work tomorrow, Wednesday morning. The union negotiating committee will put all its energy at the bargaining table to reach an agreement before Monday."

SAQ management has also committed to providing all the addresses where the SAQ stores its bottles in order to reassure the union side of the threat to use replacement workers or scabs.

Nothing came out of the negotiation meeting on Tuesday. Neither SAQ management nor the local branch of the Canadian Union of Public Employees, affiliated with the QFL, would reveal the content of the talks.

Some 800 workers have been on strike since 5 a.m. Monday. They are assigned to the SAQ warehouses, as well as to the supply of SAQ branches, among others.

In addition to these two days of walkout, the union had held a one-day isolated strike on Nov. 16.

CUPE expected to receive a substantial offer from SAQ management on Tuesday. It said on Sunday that it would then see if it was appropriate to interrupt its walkout.

As for the SAQ, it reported that the strike was already having a significant impact on supplies and deliveries.

Among the issues in dispute are wages, overtime and occupational health and safety.

Canada's Chief Public Health Officer Dr. Theresa Tam and other federal officials are providing an update on the COVID-19 pandemic in a virtual press conference.

Canada said on Friday it was imposing additional sanctions on Russian oligarchs and banning the import and export of targeted luxury goods from Russia in response to Moscow's invasion of Ukraine. The new measures would put restrictions on 14 individuals including Russian oligarchs, their family members, and close associates of Vladimir Putin, according to an official statement.

Canadians going hungry: How inflation's hitting some harder than others

Experts and advocates anticipate that more Canadians could be at risk of going hungry as inflation continues to outpace many consumers' grocery budgets.

British royalty and Hollywood royalty came together on the red carpet for the charity premiere of the new Tom Cruise movie, "Top Gun: Maverick," on Thursday night.

Blocking inflammation may be why some pain becomes chronic, study finds

A new Canadian study has found that using anti-inflammatory drugs and steroids after injury may actually increase the chances of developing chronic pain.