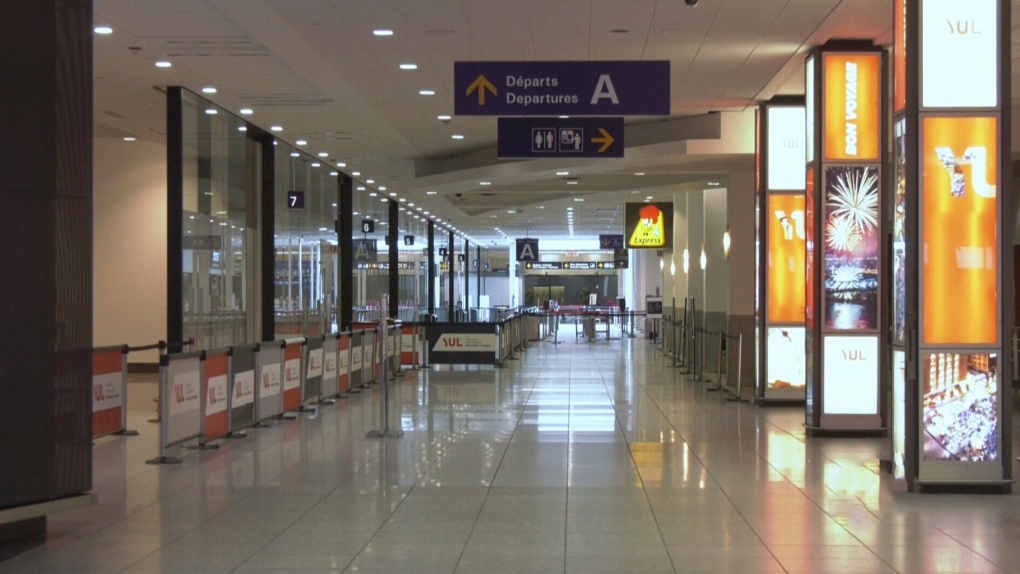 MONTREAL -- On April 2, Grattan Cosman, his wife, and two other couples were supposed to be on a plane to the Caribbean, but like thousands of other travellers, the COVID-19 pandemic stuck a pin in their plans.

“We knew what was coming here, we didn’t know how fast it was going to come; if it was going to affect trips,” said Cosman, who lives in Saint-Johns, New Brunswick. “We were hopeful right ‘til the end that we would be going.”

Cosman spent around $3,600 on a weeklong resort vacation for two in Mexico. When he made the reservation with Sunwing Vacations back in February, he decided to purchase the company’s “Worry Free Cancellation Waiver” insurance, just in case.

When the pandemic hit, causing travel cancellations across the globe, Sunwing initially offered all travellers the choice between a full cash refund or a travel voucher. But shortly after that, the company changed its policy and began handing vouchers out to everyone.

“We quickly had to adjust due to the changing circumstances. Therefore, in line with all other Canadian airlines and tour operators, we have adjusted our policy so that all customers are treated consistently,” a Sunwing representative said in an emailed statement to CTV News. “All customers booked on our flights will be offered a future travel credit, and as a further gesture, we have extended the validity of this credit to two years.”

During one of his COVID-19 press briefings, Quebec Premier François Legault said most airlines have found themselves in tight spots due to the pandemic.

“We must understand that the transit companies, including the big ones like Air Canada and Air Transat, absolutely do not have the money right now to reimburse everyone,” Legault said. “The problem is a lot bigger than that – they have rents to pay every month on their planes, and they don’t have that money, either.”

People like Cosman who opted for cancellation insurance when they booked their travels, however, assumed they would still have a choice between a voucher and a refund. But when Cosman reached out to Sunwing to get his money back, he was told his file would have to be reviewed.

“And then within a week, I get this sort of canned response from the office of the president that my file was reviewed and due to the COVID-19 they are only providing vouchers for travel,” he said. “And it said nothing about my insurance, or anything like this, and it did say that this is the last appeal… I can’t appeal again…”

What Cosman didn’t realize at the time is that depending on how close to the travel date the trip is cancelled, Sunwing will issue vouchers instead of refunds even to passengers who purchased insurance. He missed the window for a partial cash refund by a day.

“I was very disappointed because the insurance didn’t seem to do anything for me,” Cosman said. “I’d given them the money in February, and I wasn’t on a plane, I did not consume anything at the resort, they didn’t put me up at the resort – so all that money, where is it?”

Legault said his first choice would be to refund travellers as opposed to offering them vouchers, but that travel companies simply don’t have the means to right now.

“The customers who want a voucher could accept one, but if you’ve lost your job, if you’re in a difficult financial situation, you should not be forced to accept a voucher that you’re not even sure you’re going to use in the next two years,” she said.

Theriault added that even though some companies like Air Canada have removed expiration dates on their vouchers, the gesture is nowhere near enough.

“This is what a voucher should have looked like in the first place,” she said. “It’s a minimum.”

In Europe and America, airlines have refunded their passengers amid the pandemic. A petition in Canada is asking the federal government to force airlines to do the same for Canadian customers.

“Here in Quebec, our civil code is clear,” Theriault said. “If a merchant or any party is not able to do his part of the contract… Then they must issue a refund and the refund must be in the same way that you paid.”

According to Jacob Charbonneau, the CEO of Flightclaim.ca – an online law firm that helps airline passengers when they experience issues with their trips – part of the problem is confusion surrounding whose jurisdiction this is.

“There are two class actions right now on that, one in Quebec and one in Canada, obviously, because they’re breaking the law as we speak,” Charbonneau said.

Some customers have tried to request refunds from their credit card companies, but Charbonneau said the airlines have started contesting the chargebacks.

“They’re losing their commission if the client gets refunded,” he said. “Some are getting through, but there’s not a lot of it from what we’re seeing.”

Theriault explained that requesting a chargeback is a complicated process. It can’t be refused if it’s well done, but “it must be done in a certain delay, and it must contain particular information,” she said.

People often accidentally try to contest the charge rather than requesting a chargeback, which doesn’t work, because “the credit card issuer thinks that the vouchers issued by the airline are a sufficient compensation,” Theriault said.

Shortly after Cosman found out he wouldn’t be getting his money back, news about Sunwing repatriating Canadians for free amid the pandemic began to circulate.

“They’re getting praise for this, but where are they getting the money to provide free flights?” he said. “I don’t want to take away from the fact that we’re bringing people back, but you know, let’s call a spade a spade…”

“For us, it’s pretty, pretty clear the passengers are entitled to a refund,” Charbonneau said. “We know this is a difficult situation for the airline industry as we speak – the government is going to have to bail out the airlines, but this bail out shouldn’t be done on the head of the air passengers.”