An American teenager who was seriously injured in a drive-by shooting in Laval, Que. during a family vacation three months ago was finally released from hospital, but still isn't able to walk on his own.

Sandrick Jorcelin, a 14-year-old boy from Tewksbury, Mass., was leaving a reception hall on Curé-Labelle Boulevard for a family celebration around 1 a.m. on May 8 when the car he was travelling in was shot at several times.

The innocent bystander was seriously injured by at least one bullet to his abdomen that remains lodged in his back. His mother, in the same car, had her hand struck by a bullet but was not seriously injured.

His uncle, the driver, died in the shooting. Police have identified him as Junior Lemoyne Printemps, 28.

"It was a lot for the past three months but I'm happy I finally get to be home and be with my family," Jorcelin told WCVB in Boston.

A police motorcade escorted the young boy Wednesday from the Spaulding Rehabilitation Centre in Boston.

Once home and using a wheelchair, a welcome party of family, friends and basketball teammates sporting "Team Sandrick" t-shirts greeted him with cheers.

Now, he's on a long road to recovery.

"I'm happy I'll be with my family, all my friends again. It's a dream come true," the teen said. 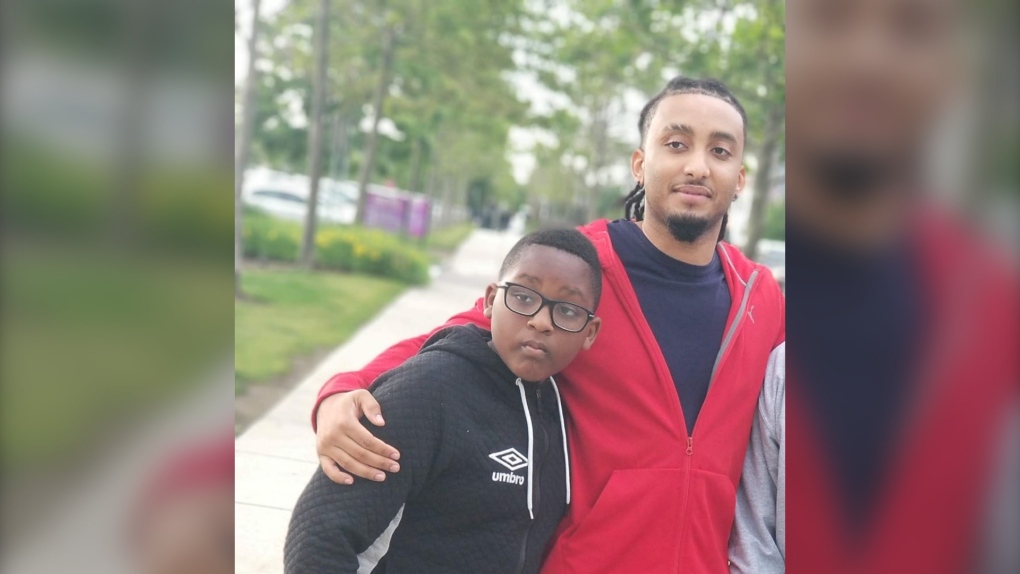 Junior Lemoyne Printemps, right, with his 14-year-old nephew, Sandrick Jorcelin. Printemps, 28, was killed in a drive-by shooting in the early morning hours on Sunday, May 8, 2022 leaving a family birthday party in Laval. Jorcelin survived the gunfire but was seriously injured. (Submitted photo)

Jorcelin lost his kidney, spleen and part of his lung in the shooting and even though he still can't walk on his own, he said he's determined to get back on his feet soon so he can rejoin his friends on the basketball court.

Before he was airlifted to the U.S., Jorcelin was paid a visit by the Laval police officers who saved him the night of the shooting.

"Hey, you saved me," Jorcelin said lying in a hospital bed, pointing to the officer as he walked into the room. The visit brought the injured boy to tears.

14-year-old Sandrick Jorcelin from #Everett was shot in a drive-by shooting outside of Quebec, leaving a bullet lodged in his back. His father says it was a case of mistaken identity. This emotional video shows him meeting the officers who helped save his life. #Wcvb pic.twitter.com/G6jf62talu

Laval police told CTV News on Thursday there have still been no arrests made in the shooting, but the investigation is ongoing.

In the days following the shooting, Quebec provincial police set up a command post near the crime scene to invite any potential witnesses to come forward.

Ontario woman sexually assaulted by Jacob Hoggard says she is suing him for $2.8M

The Ottawa woman who former Hedley frontman Jacob Hoggard is convicted of sexually assaulting says she is now suing him for $2.8 million.

Videos of protests in Iran leak despite internet bans

Videos of revolts and unrest started to flood the internet when Iranian protestors flocked to the streets in response to the death in custody of Mahsa Amini, a 22-year-old woman allegedly detained for wearing her hijab improperly.

Hockey Quebec says it has lost confidence in Hockey Canada and will not transfer funds to the national organization, while Tim Hortons and Scotiabank have extended sponsorship boycotts.