A 14-year-old boy from the U.S. who was shot in a drive-by shooting in Laval last weekend was scheduled to be airlifted back home to the Boston area Thursday with a bullet still lodged into his spinal cord.

Sandrick Jorcelin, from Everett, MA, was visiting family Saturday who he hadn't seen since the start of the pandemic. It was supposed to be a fun, family getaway, but in a matter of seconds, it turned into a nightmare.

The car he was travelling in on Cure-Labelle Boulevard was sprayed with bullets as the family left the Paragon reception hall for a birthday early Sunday morning.

He survived the attack, but his 28-year-old uncle, in the driver's seat, did not.

"All of a sudden they felt like they were in the middle of warfare where they got shot at many times," said Carducci Chery, a close friend of the family, in an interview with CTV News. Chery is acting as a spokesperson for the family as they focus on taking care of their son.

Jorcelin was rushed to Montreal's Sacré-Cœur hospital after the morning attack. The bullets tore through his body, damaging his spleen, his left lung, his large intestine, his spinal cord, as well as his left kidney, which had to be removed. The teen is set to get a medical transport to Massachusetts General Hospital to remove the bullet from his spine.

Jorcelin's spirits, however, were lifted Thursday when the Laval police officers who responded to the 911 call paid him a visit in his hospital room.

"Hey, you saved me," Jorcelin said lying from a hospital bed, pointing to the officer as he walked into the room.

14-year-old Sandrick Jorcelin from #Everett was shot in a drive-by shooting outside of Quebec, leaving a bullet lodged in his back. His father says it was a case of mistaken identity. This emotional video shows him meeting the officers who helped save his life. #Wcvb pic.twitter.com/G6jf62talu

Jorcelin cried as he got a hug from the officer, who tells him, "You're so strong, man. You are so strong."

"Thank you so much," the Grade 8 student said through tears.

'HE'S JUST SUCH A SWEET KID'

Laval police have not said whether they've made an arrest in the case but said in a news release Thursday they have arrested a 25-year-old man and seized two vehicles "related to the events of urban gun violence of the last few days" after officers conducted a series of raids in Laval and Terrebonne.

Police did not say specifically if the arrest is in connection with the May 7 drive-by shooting, but more information will be released Friday.

The family, meanwhile, wants answers as to how something like this could have happened since it was an unprovoked attack. They're also wondering what, if any, the injuries mean for Jorcelin's future. 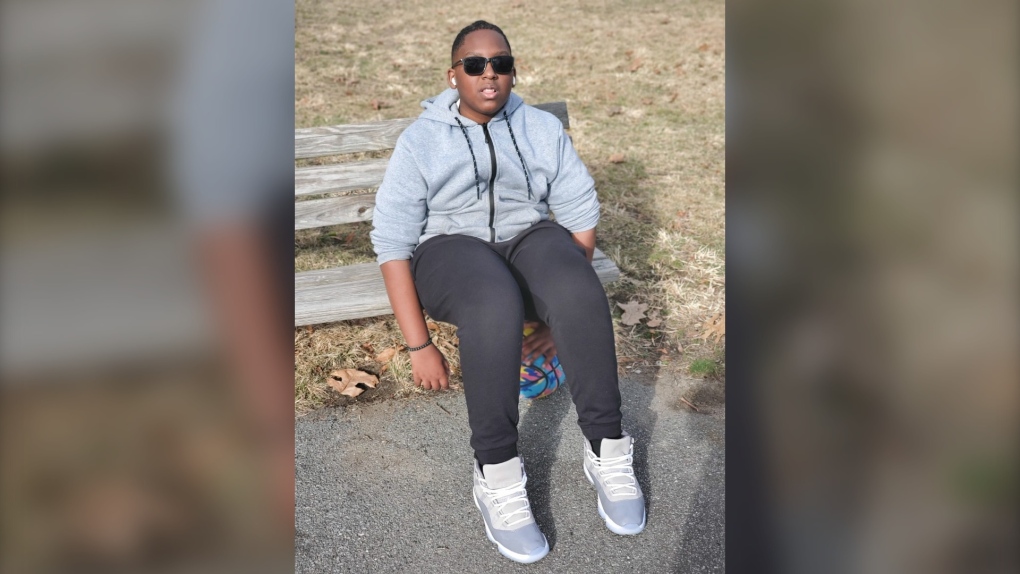 Grade 8 student Sandrick Jorcelin plays for the Mass Elite Basketball team and is a big fan of the Boston Celtics. (Submitted photo)

Jorcelin's a basketball fanatic, playing for the Mass Elite Basketball team, and his family hopes he can continue playing his favourite sport.

"So that's the unknown that hurts so much because he loves basketball. Even yesterday, he was telling his dad, 'Can I borrow your phone so I can follow the Celtics?'" said Chery.

Members of the Mass Elite Basketball team wished him a speedy recover in a video posted to Twitter on Wednesday.

We all wish 8th grader Sandrick Jorcelin a full recovery after the tragedy this weekend
Donations to his family appreciated⬇️https://t.co/sCvqxYKvD8 pic.twitter.com/okERtGVrlY

Chery, whose son is friends with Jorcelin, described him as "so polite" and who "touched everyone in the hospital."

"[When] we were away on vacation, he'd text us saying, 'Hey, I hope you guys having a good vacation. Enjoy your time.' He's just such a sweet kid."

"This is why we're reaching out and crying for help for whoever is an expert with spinal cord injury ... to see Sandrick walking again. We want to see him back to the 14-year-old that he is and hopefully get back to his this path," Chery added.

The family turned to a GoFundMe to help cover the cost of the medical transport to Boston and his treatment that is far from over. As of Thursday afternoon, they had raised more than $69,000.

Police don't know why the family was targeted as the investigation is ongoing. Anyone with information about the shooting can call the Laval police line at 450-662-INFO (4636).

Chery had a message for the people responsible: "Gun violence would never stop whatever you guys are trying to achieve. As you can see, innocent folks are being hurt. Lives have been changed. How do you feel about that? Do you feel like you've accomplished something here? I don't think so," he said.

"This is not right. This has to stop."