Two years after the disappearance of Melissa Blais, her family hopes for answers 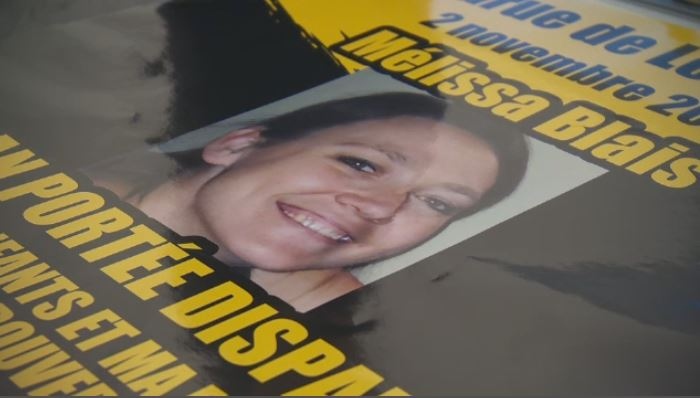 The family of missing mother Melissa Blais continues to draw attention to her mysterious disappearance in 2017.

MONTREAL -- Two years after the disappearance of the 34-year-old mother, Mélissa Blais' family still cannot understand what could have happened on Nov. 2, 2017, to explain her disappearance.

"There is nothing that has been found, neither her car, nor a piece of clothing, nor her cell phone. It's as if she vanished, and we have been in nothingness for two years," said sister-in-law Sylvie René, holding back her tears, at a gathering the family held Saturday in Louiseville, Mauricie.

The rally was an opportunity to bring the issue back to the fore, taking what may have been the same route as Mélissa Blais in the municipality of 7,000 on Saint-Laurent Ave.

"My greatest hope is to have one clue that leads us somewhere," said René in an interview with The Canadian Press. Relatives hope that this will incite someone to deliver information to the Sureté du Québec (SQ), which installed a mobile command post nearby in the parking lot of the town hall.

Those present recognize that the chances of finding her alive are rather slim, if not impossible after two years.

René sees only a crime as being able to explain Blais' disappearance.

"It is always the thesis that she was attacked in the street when going to her car. I do not see anything else. If she had an accident, we would have found the car. We even scoured the area thanks to a friend who has a helicopter, "she said.

The march was also an opportunity to "break the prejudice" since Blais was last seen exiting a bar on Nov. 2, 2017, around 2:30 in the morning.

"The people around are prone to make judgments, but we really understand what others have experienced when we have both feet in," explained Sylvie René.

The SQ invites people who have information, even if it may seem trivial to explain the disappearance, to share it with the police or by presenting themselves at the mobile command post on site for a good part of the day or by sharing it with the Centrale d'Information criminelle at 1-800-659-4264.

Mélissa Blais, originally from Yamachiche, is 5 feet 7 inches tall, weighs 66 kg (145 pounds), has brown hair and brown eyes. At the time of her disappearance, she was travelling in a black 2011 four-door Toyota Corolla.

This report by The Canadian Press was first published Nov. 2, 2019.