A deer is seen at the Michel-Chartrand Park in Longueuil, Que., Friday, November 13, 2020. City officials have been facing criticism after saying that they will have to kill half the white-tailed deer living in a municipal green space as efforts to control their population haven't worked. THE CANADIAN PRESS/Paul Chiasson

LONGUEUIL, QUE. -- Two other people have been arrested in connection with death threats against the Longueuil mayor, following the city's decision to capture and kill half of the white-tailed deer that live in the Michel-Chartrand park.

The two suspects, arrested Wednesday and Thursday, are aged 26 and 37 respectively, according to the Longueuil police (SPAL) news release.

The two individuals are not Longueuil residents. They were released under certain conditions and they could face criminal charges according to the SPAL.

On Tuesday, police arrested the first individual in this case.

The threats are alleged to have been sent after the city's announcement last week that it planned to capture and kill some 15 white-tailed deer in order to control the population and protect the park's ecosystem.

The animals' meat were to be distributed to food banks. 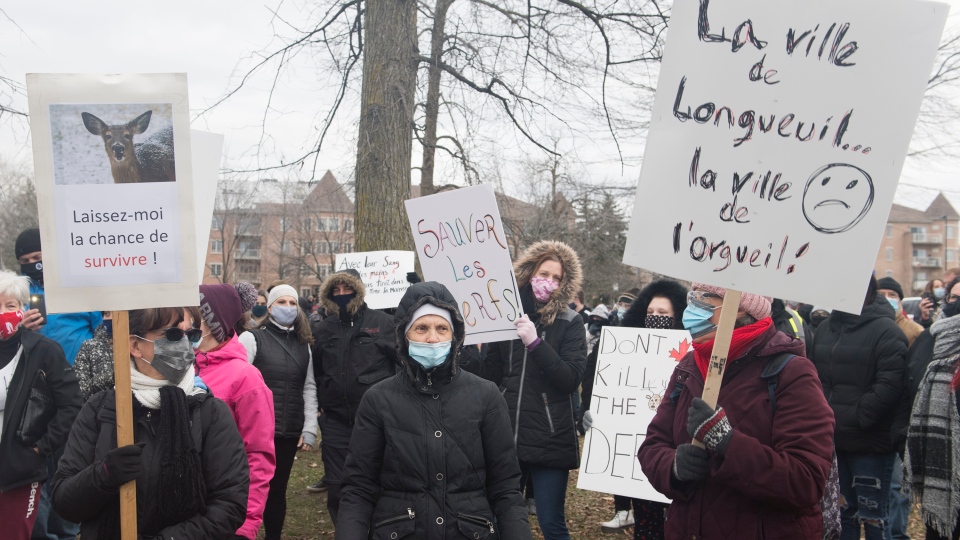 The decision was not unanimous and raised the indignation of some citizens. Longueuil Mayor Sylvie Parent received threats deemed sufficiently serious by the Longueuil police for a criminal investigation to be opened.

The city's decision was adopted by the majority of the executive council overnight from Tuesday to Wednesday.

The SPAL indicated that the investigation is continuing in relation to other threats in connection with the management of the deer population and that other arrests could follow.