MONTREAL -- In Montreal, three of the four lanes of the new Ville-Marie Expressway (Highway 720) westbound are open to traffic, as are two major entrances after a long closure: those from Lucien-L'Allier and Du Fort streets.

These reopenings result in the permanent closure of the temporary entrance from Rose-de-Lima Street off St. Antoine St.

The Ministry of Transport Quebec (MTQ) reports that despite the reopening of the Ville-Marie lanes, work will be carried out until early next month to finalize the construction of the concrete pavement and its foundation.

The repair work on the Turcot Interchange, which started in 2015, is over 80 per cent complete; it should be finished in about a year. 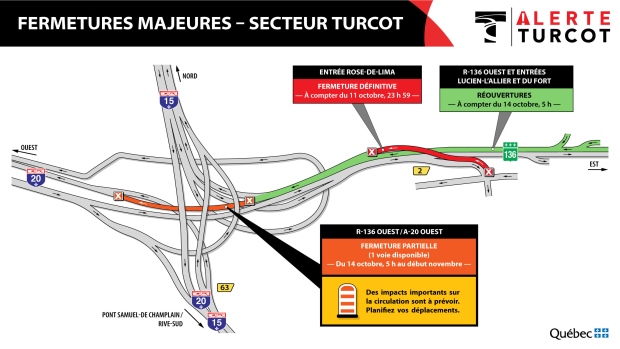 This report by The Canadian Press was first published Oct. 14, 2019.