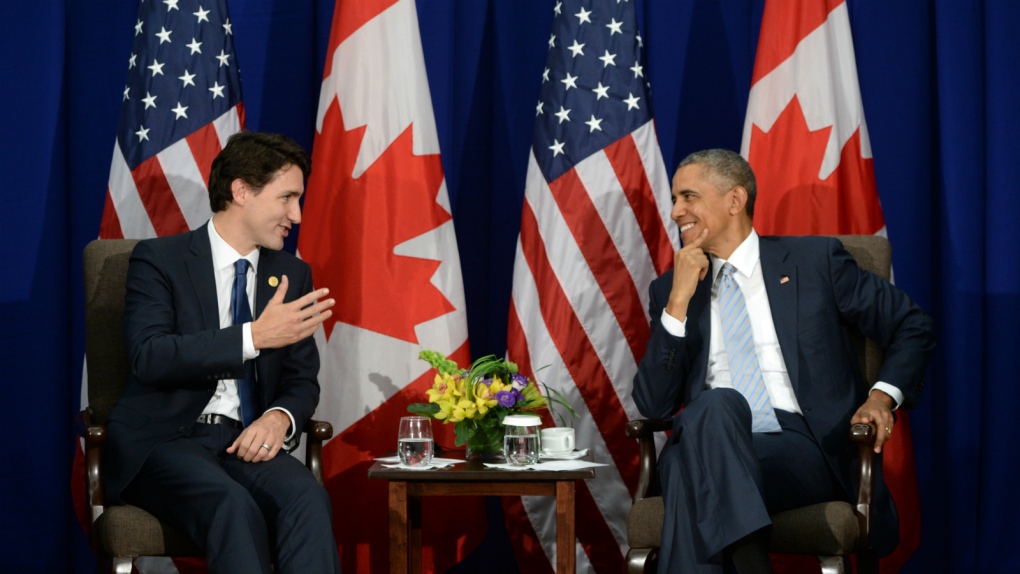 WASHINGTON -- This month will feel like a blast to a long-lost past where Canadian prime ministers visited the United States frequently and received considerable attention while doing so.

Justin Trudeau will be in the U.S. three times this month: for a state-level visit to the White House this week, to speak to a women's group in New York the following week, and for an international nuclear summit in Washington at the end of the month.

The number of visits in such a short period and the level of attention they're expected to garner will have a bit of a Mackenzie King feel to them.

The Canadian Press examined press coverage of every prime ministerial visit to the U.S. since 1933 and found two clear long-term trends: fewer visits, and less American attention to them.

When R.B. Bennett came in 1933, 500 people awaited him on the White House lawn. In the old days, not only did Canadian prime ministers address the U.S. Congress. In a now-unimaginable scenario, so did governor-general Vincent Massey, in 1954, and his speech drew a front-page spread in the New York Times.

Newspapermen would crowd into the Canadian embassy and write lengthy stories even when the famously tight-lipped King had nothing to say, during his several-times-a-year visits to his buddy Franklin Roosevelt.

"It's only to be expected that when one of the capital's favourite visiting statesmen comes to town he will be wined, dined and feted," a 1942 society column in the Washington Post began.

"Just how long the bachelor Prime Minister will remain in Washington is not yet known, but probably a number of the capital hostesses who would like to entertain for him will be doomed to disappointment, for this is definitely a 'business trip."'

King once entered FDR's bedroom after sleeping at the White House, and read him a briefing note while the president was still in bed.

The trips became less familiar and less frequent after the Second World War.

Jet travel took leaders to other, more distant destinations; international institutions like the UN replaced the stream of one-on-one meetings in Washington; Louis St. Laurent went only a few times over eight years.

Canadian ambivalence about this new dynamic was reflected in a 1956 piece in the Chicago Tribune, about the first of what later became known as Three Amigos summits.

At the first-ever Canada-U.S.-Mexico leaders' meeting, in West Virginia, it noted: "Canada traditionally has kept aloof from Latin America in trade matters, in the belief that it can deal better with Washington on a bilateral basis."

Lester Pearson visited a few times in a short span. He was on the front page of the New York Times and Washington Post, smiling with John F. Kennedy at the family compound in Cape Cod.

His next visits were tinged with tragedy. He came for Kennedy's funeral. He again paid tribute to Kennedy during an early 1964 trip where he landed on the White House lawn by helicopter, and said: "I am very conscious as I stand here today of the grievous loss of a great young leader."

Some productive early meetings with LBJ saw them ratify the Columbia River Treaty and introduce free trade in auto parts, which American newspapers astutely predicted might be the precursor to a more extensive trade deal.

But Pearson never visited again, after a famous 1965 dust-up. He'd spoken out against the Vietnam War, and Johnson grabbed him by the lapels and snarled: "Don't you come into my living room and piss on my rug."

American newspapers noted the obvious tension between the two. But the up-close-and-personal exchange didn't became public until later.

Brian Mulroney did have an extraordinarily close relationship with American presidents.

He visited Washington just one week after being sworn in as prime minister. A Wall Street Journal headline described him as, "An Outspoken U.S. Friend In Ottawa."

He remained true to his word. The impetus for free trade grew from the first formal Mulroney-Reagan summit. Mulroney remained close to his counterparts, delivering a eulogy years later at Ronald Reagan's funeral. He was also there on a Bush family fishing trip when young Jeb hooked his president-dad by accident.

But American newspapers hardly even covered the original free-trade negotiations.

Several ran items about Jean Chretien having to elbow his way past Mexico's Vicente Fox to be the first leader to visit George W. Bush. The New York Times put a statistical value to the loss of American media interest in Canada -- it noted how many outlets had shut their Canadian bureaus, with only five full-time reporters there compared to 50 in Mexico.

But the Canadian government wound up paying to get U.S. media coverage -- it hired Democratic and Republican media consultants to arrange interviews, so that the PM could tell Americans how Canada had weathered the financial crisis.

There's a more relevant precedent for the attention on Trudeau: his dad.

"A world which seldom spares a thought for Canada and Canadians is suddenly interested in Pierre Elliott Trudeau as the most improbable of prime ministers," began a 1969 profile in the Washington Post.

"What sort of nation chooses its leader from a discontented racial minority, from the higher intellectual elite, the Bohemian set, and the young angry radicals."

Another article noted his reputation for somersaults, headstands, and sliding down staircases. The New York Times quoted someone calling him "groovy." On that first trip Trudeau famously likened living next to the U.S. to sleeping with an elephant.

Over time, the elephant grew restless.

Trudeau infuriated Americans by ordering a reduction in oil exports to the U.S. by nearly one-quarter, during the 1970s oil shock. On one visit, he was warned by a famous lawmaker that this would cause an "ugly relationship."

Late in his career, his peace tour got a bit of coverage on the inside of the major newspapers. There were a couple of opinion pieces, either calling it admirable or quixotic.