Toronto vs Montreal: A tale of two cities off the ice 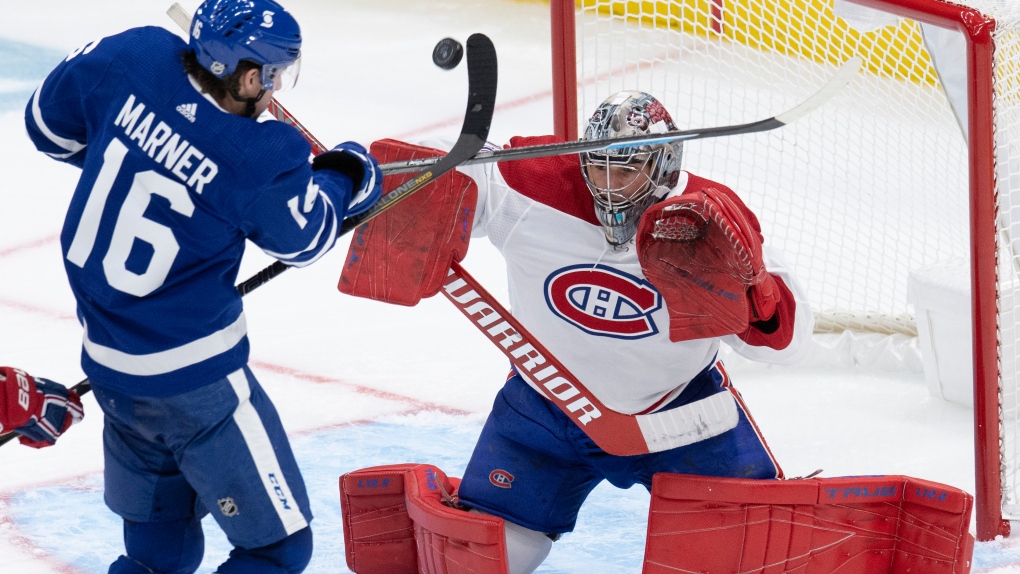 MONTREAL -- Those looking for a refresher on the history of the rivalry between the Montreal Canadiens and Toronto Maple Leafs need look no further than Roch Carrier's beloved tale "The Hockey Sweater."

Drawing from his past experience as a hockey-mad boy in rural Quebec who idolizes Maurice Richard, Carrier tells the story of how his life turns upside-down when Eaton's mistakenly sends him a sweater of the hated Maple Leafs to replace his worn No. 9 Montreal jersey.

Given hockey's place in Canadian culture, the old animosity between the Leafs and the Habs is an entry point for understanding the dynamic between the cities. But the differences between Canada's largest cities invite other comparisons in sports, culture and business.

With the start of the first playoff series between the Leafs and Habs since 1979 on the horizon, here is a look at just a few of the other ways the cities stack up against each other. 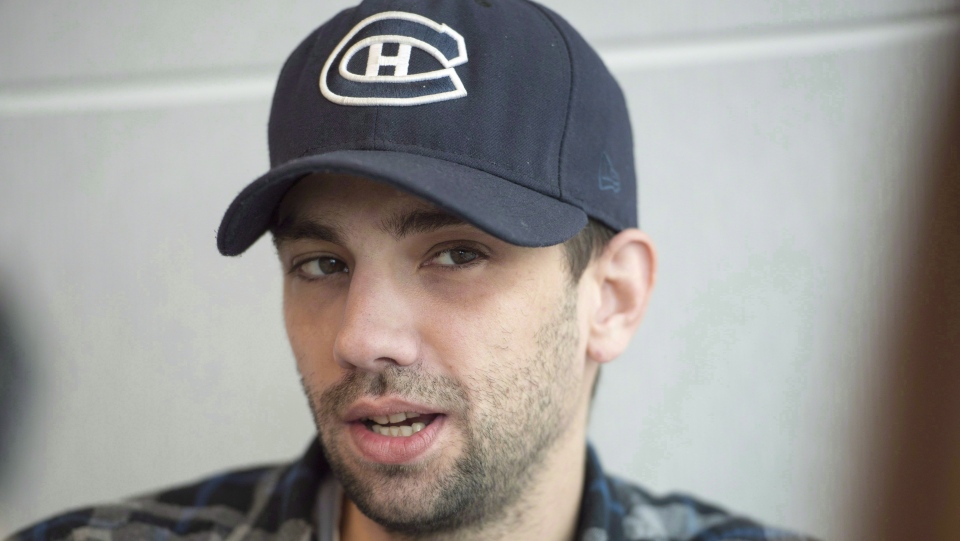 Jay Baruchel is seen during an interview with The Canadian Press in Toronto on Monday, October 29, 2018. THE CANADIAN PRESS/Frank Gunn


When it comes to ardent celebrity fans, the Habs score with Jay Baruchel. The Montreal-raised comedy star is a well-known Canadiens devotee and wrote extensively about them in his book "Born Into It."

Though the actor-filmmaker now lives in Toronto, he says his love of Les Habitants is just as strong.

American actor Viggo Mortensen is equally passionate about the team, often sporting Canadiens garb and even bringing a Habs flag onstage to accept a trophy for "A Dangerous Method" at the 2012 Genie Awards.

Star superfans on the Leafs side include Stratford, Ont.-raised pop sensation Justin Bieber, who has stated his song and music video for "Hold On" are a "love letter" to the team.

And let's not forget about Toronto-raised comedy star Mike Myers, who has put references to the team in some of his "Austin Powers" films as well as "The Love Guru." 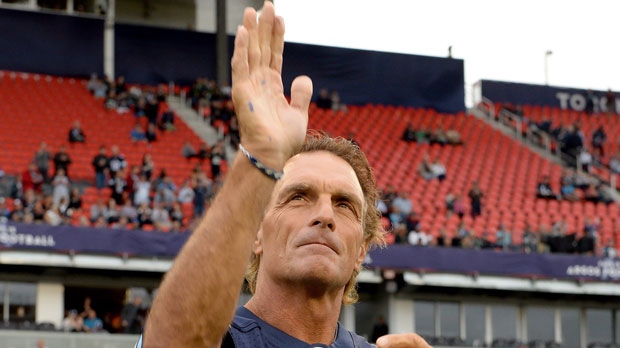 Since star quarterback Doug Flutie joined the Argonauts in 1996 and the Alouettes returned to Montreal that same year, the clubs have met nine times in the playoffs.

Montreal holds the 5-4 edge after losing the first two years to Flutie-led Grey Cup teams in the East Division final.

The 1997 game in Toronto was a thriller with Flutie finding Mike (Pinball) Clemons for a 59-yard touchdown to win it in the final minute.

The Alouettes won their own nail-biter at home in 2003 when star quarterback Anthony Calvillo ran 35 yards for a controversial touchdown -- the Argos felt he fumbled before the goal-line -- in a 30-26 win. 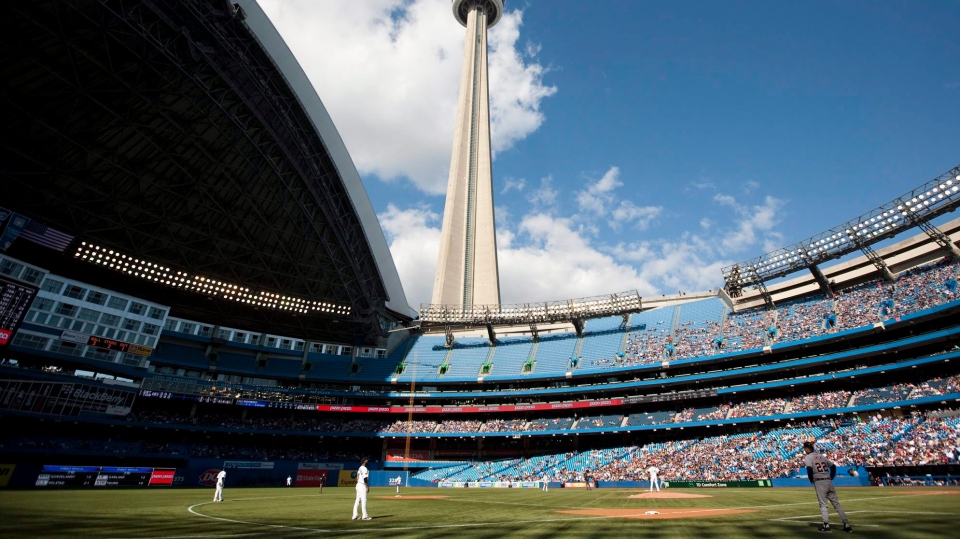 With the Blue Jays in the American League and the Expos in the National League, the two teams were limited to Pearson Cup exhibition action before interleague play started in 1997.

The Blue Jays had the 24-19 edge in official games before the Expos moved to Washington and became the Nationals in 2005.

That day, Montreal journeyman Jeff Juden outdueled Roger Clemens for a 2-1 win before 50,436 fans, the first sellout in Toronto in two years.

Clemens won the Cy Young Award as the AL's top pitcher with the Blue Jays in 1997 and '98. But Juden, who said Clemens was his idol growing up, took a no-hitter into the eighth and gave up just two hits in 8 1/3 innings on Canada Day to give the visitors the win.

Juden got a big ovation from the Toronto crowd and tipped his hat to acknowledge the fans when he exited the game. 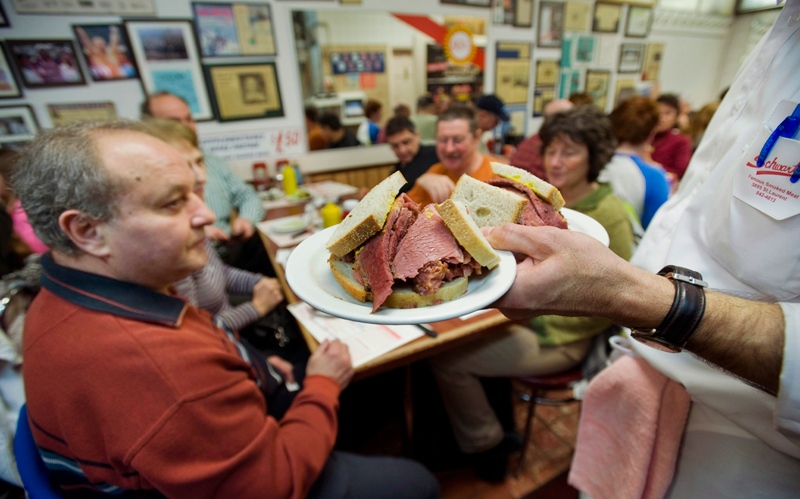 One of the best ways to get a taste for a city is through its smoked-meat sandwiches. And in Montreal and Toronto, there are a couple of delicatessens of competing stature.

In Montreal, there's the famed Schwartz's Deli, which has been slinging smoked meat seasoned with its original spice blend since 1928.

The decades of buildup in its brick smokehouse have cemented the greasy spoon's reputation as a cultural institution, attracting carnivores from around the globe to its Saint-Laurent Boulevard storefront.

The classic Schwartz's combo features two slices of mustard-drizzled rye packed with more meat than you could gracefully bite into, with a pickle, coleslaw and fries on the side.

Nestled in the north Toronto suburb of Thornhill, Centre Street Deli says its smoked meat stands on its own.

The meat is cut by hand, creating a melt-in-your-mouth texture that no machine could mimic. Slices are piled so high that it takes two plastic sword picks to maintain the sandwich's structural integrity.

Pair that with a side dish from Centre Street's lengthy menu of Jewish delicacies, and you'll have yourself a meal you won't soon forget. 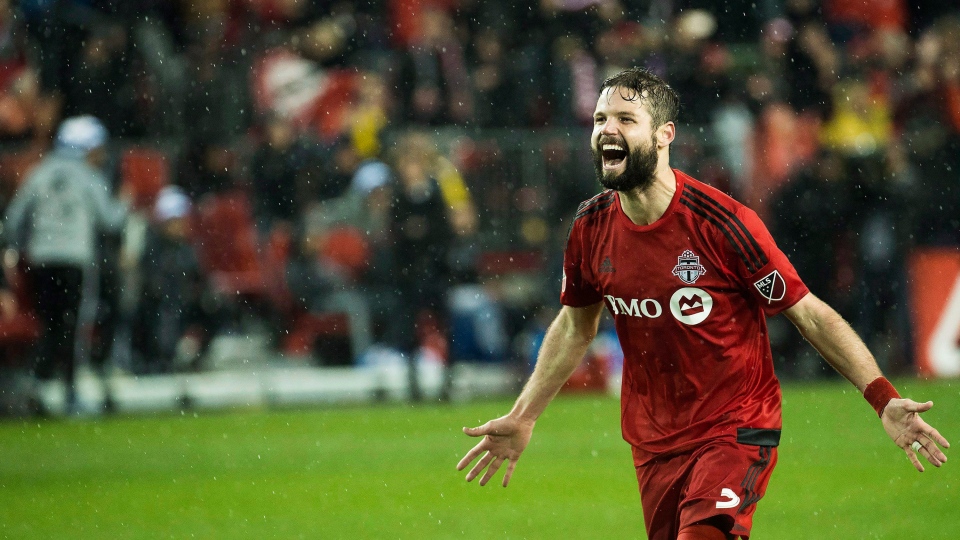 "It's very evident around here how this whole organization and certainly the fanbase feels about Montreal," Moor, now a member of the Colorado Rapids, said after joining Toronto prior to the 2016 season. "In fact my Twitter feed, when I first came over, was filled with (fans saying) `OK, No. 1, we hate Montreal."

Toronto holds a 15-11-4 edge in MLS regular-season and playoff meetings. But both teams have scored hits along the way.

In 2015, Montreal humiliated visiting Toronto 3-0 to spoil TFC's first ever post-season appearance. That same year, Montreal bundled Toronto out of the Canadian Championship in the semifinals on the away-goals rule.

Toronto got its revenge in 2016, dispatching Montreal 7-5 on aggregate in a wild and woolly Eastern Conference final that saw Montreal win 3-2 at Olympic Stadium before Toronto rallied for a 5-2 victory at BMO Field.

The next year Sebastian Giovinco's 95th-minute goal gave Toronto a 3-2 aggregate win in the Canadian Championship final. In 2019, Montreal added to Toronto's history of penalty shootout pain by winning the Canadian crown.

"I like that it's a little bit unfriendly," then-Toronto coach Greg Vanney said in 2017. "It becomes you and your team, and us against them. That's what it should be about. That's why those rivalries are so special." 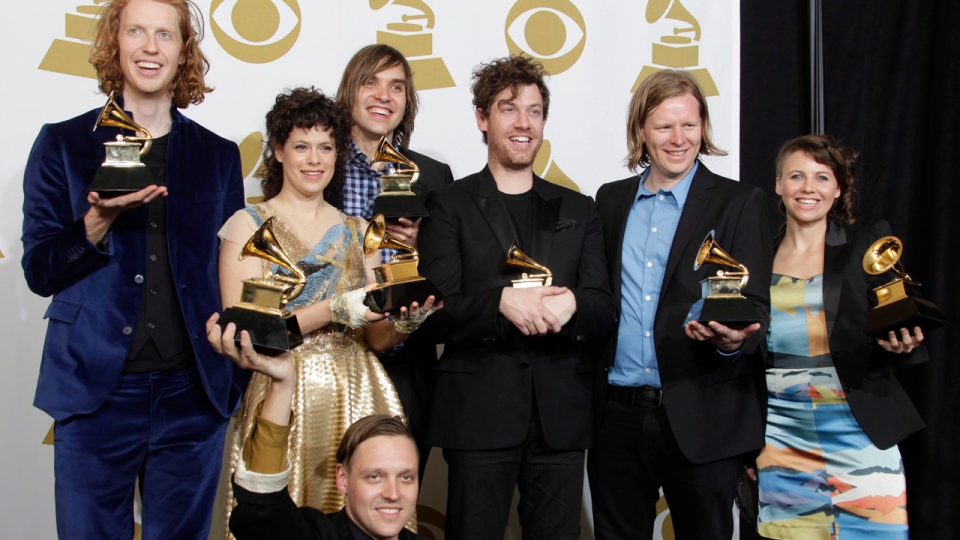 Arcade Fire pose backstage with the award for album of the year at the 53rd annual Grammy Awards on in this Feb. 13, 2011 file photo taken, in Los Angeles. (AP Photo/Jae C. Hong, File)

Rising in the early aughts, indie-rock collectives Arcade Fire and Broken Social Scene swept music festivals with a similar sound, though their lyrical hearts were often in different places.

Broken Social Scene's Toronto-bred leaders Kevin Drew and Brendan Canning went in another direction with songs that were seeped in heartbreak. Both acts met on common ground when they toured together in 2017. 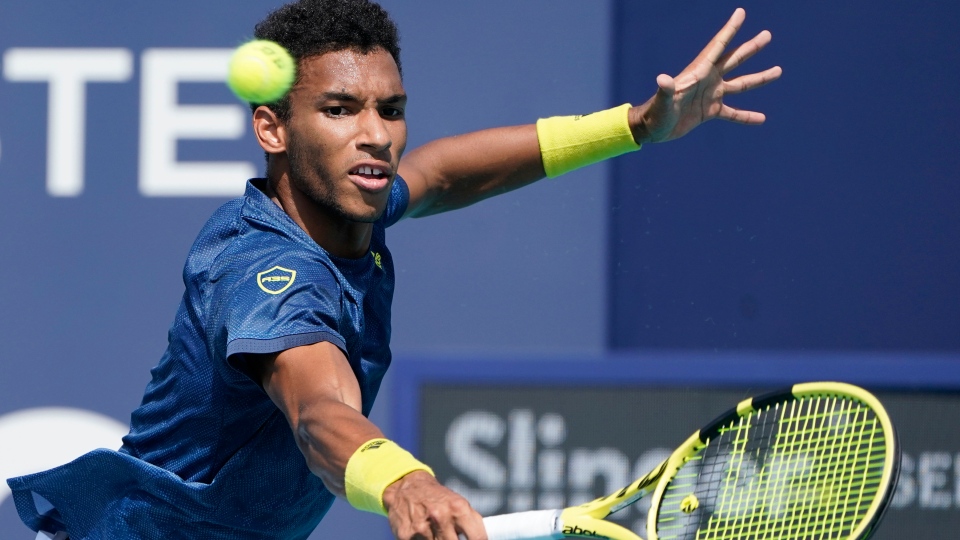 Born one year apart, Denis Shapovalov of Richmond Hill, Ont., and Felix Auger-Aliassime of Montreal became friends and rivals in the junior ranks.

Now both ranked in the top 25 in the world, the 20-year-old Auger-Aliassime has a 3-2 edge on the 22-year-old Shapovalov in ATP Tour or Grand Slam events.

Auger-Aliassime was asked recently if he'll place a bet on the series with Shapovalov.

"It's a tricky first round for us. I don't know if there's going to be a bet going. I'm not too much of a bettor myself," Auger-Aliassime said.

"I do hope the best for the Habs and Montreal. They work hard, they deserve it. I hope they can put out a good performance against Toronto, which is always a tough opponent, especially this year."

On the women's side, Bianca Andreescu of Mississauga, Ont., has taken over the mantle as the top Canadian in the game from Eugenie Bouchard of Westmount, Que., who has fallen outside the top 100 after reaching the top five in 2014.

Andreescu is 2-0 against Bouchard, with both wins coming in her breakthrough 2019 season, including a first-round victory en route to the Toronto Rogers Cup title. Andreescu followed that up with a U.S. Open championship, becoming the first Canadian to win a singles Grand Slam crown.

After the U.S. Open win, Andreescu was a regular celebrity guest at Toronto sports events, though she also was honoured by the Alouettes in the city where she used to train in 2019. 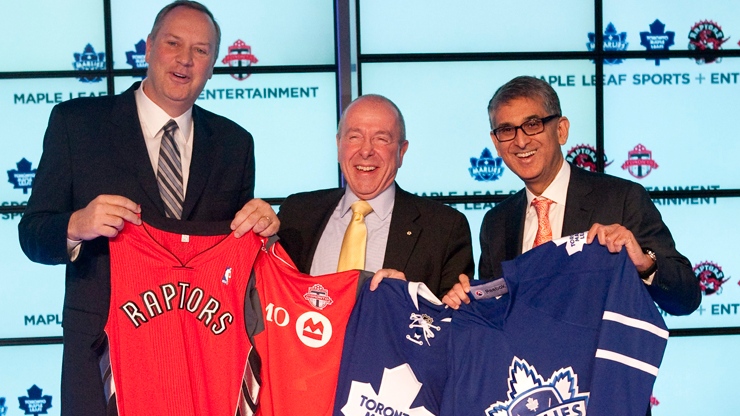 Bell and Rogers have their hands in a little bit of everything, from cellphone service and TV channels, to arena sponsorships and radio stations.

All you have to do is look at the two cities to see how they square off in the sports world: Montreal-based Bell has the Bell Centre for the Canadiens, and Toronto-based Rogers has the Rogers Centre for the Blue Jays. And in the media world, Bell owns TSN, and Rogers owns Sportsnet.

Rogers is making the effort to generate more business in Quebec, most recently with an attempted acquisition of Cogeco Communications.

However, the fierce competitors actually are teammates in one major department. Bell and Rogers are co-majority owners of the Maple Leafs and the Maple Leafs Sports and Entertainment empire.

Bell may be the older company, established in 1880, but Rogers' market share could soon surge ahead further thanks to its planed takeover of Shaw. The move, which is awaiting regulatory approval, would further entrench its presence in Western Canada.