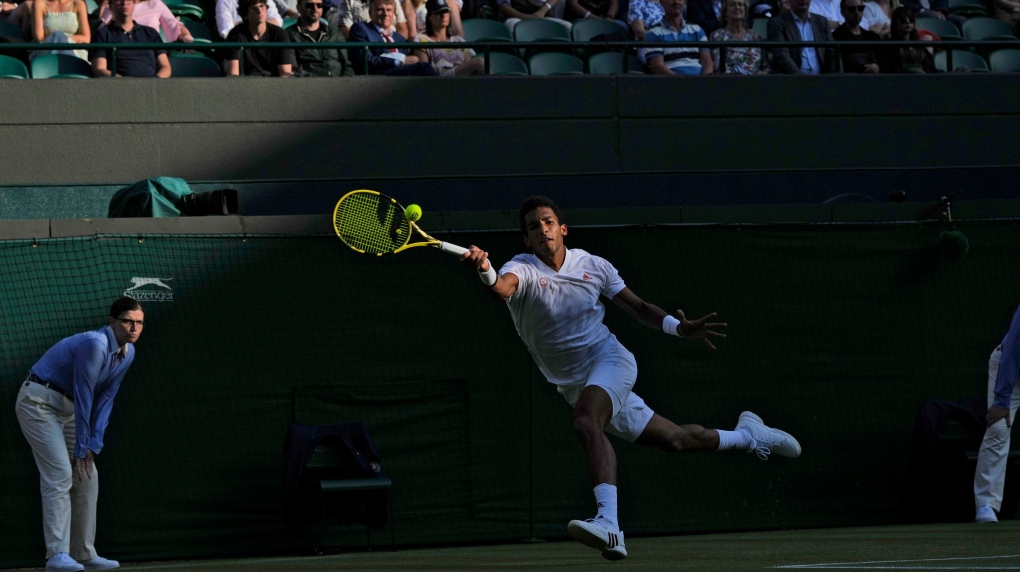 There are no ranking points on offer at Wimbledon this year, the result of a decision by the ATP and WTA Tours in response to the tournament's decision to ban Russian and Belarusian players.

But top Canadian Felix Auger-Aliassime said Saturday that won't affect the desire or intensity of players as they compete for Grand Slam titles.

The 21-year-old reached the quarterfinals a year ago. And so he will see those ranking points drop off the 52-week rolling computer tally in two weeks, without having an opportunity to replace them at this year's edition.

Beyond that, he has a challenging opening round against French-American Maxime Cressy.

Cressy, who reached the final at the ATP tournament in Eastbourne this weekend, is a rare throwback -- a serve-and-volley player who will challenge Auger-Aliassime from the net at every opportunity.

The other Canadian in the men's singles draw, No. 13 Denis Shapovalov, is in an even worse situation as he reached the semifinals a year ago, losing to Novak Djokovic.

Shapovalov will face Frenchman Arthur Rinderknech, who defeated him a few months ago in Doha, Qatar on hard courts.

Auger-Aliassime's grass-court lead-up season was fairly good; he reached the semifinal at his first tournament in `s-Hertogenbosch, Netherlands and the quarterfinals the following week in Halle, Germany. In both cases, he was defeated by the eventual champion.

Shapovalov enters this year's Wimbledon having lost his opening singles match in his last five tournaments. That includes grass-court losses in Stuttgart, Queen's Club and, this week, a desultory 6-4, 6-1 defeat to Benjamin Bonzi of France in Mallorca.

At Queen's Club last week, Shapovalov said he just had to be patient.

"If you look at the years before last year, I didn't have much success on the grass. It's kind of the same feeling now -- I'm in the matches, but not getting my breakthroughs. But I think with having last year behind me, I feel more calm going into Wimbledon," Shapovalov said.

"I know that if I pull through one or two of these kind of matches, things can start really to click on the grass. You start having a little bit of confidence and all of a sudden you're converting more on those opportunities."

On the women's side, Bianca Andreescu arrives at Wimbledon on the wings of a run to the final this week in Bad Homburg, Germany.

The 22-year-old had one career WTA-level victory on grass coming into this season. But in the run up to Wimbledon, she won four matches and will look for her first Wimbledon victory on Tuesday against American qualifier Emina Bektas.

If Andreescu wins, she could be looking at a second-round encounter with No. 17 seed Elena Rybakina of Kazakhstan.

A year ago, Andreescu lost in the first round of Wimbledon to Alize Cornet of France.

The other Canadian in the women's singles draw is Vancouver's Rebecca Marino, who will be returning to the All-England Club for the first time since 2011.

Marino left the sport for 4 1/2 years to address mental-health issues, returned in early 2018. After dealing with some injuries early on, she's healthy now and close to a return to the top 100.

"It feels like forever -- a little bit -- but it also doesn't feel that long. I'm just really excited to be back," Marino said last week at Eastbourne, where she made the main draw as a lucky loser and won her first-round match.

"It's my first (direct) main draw since I've returned. It's too bad it's not under different circumstances, because I had to rely on the Russians and Belarusians to be withdrawn. But I'm still really proud of it."

The 31-year-old faces fellow unseeded played Katarzyna Kawa of Poland in the first round Monday.

In addition to the four players in the singles draws, Gloucester, Ont.'s Gabriela Dabrowski is seeded No. 3 in women's doubles with partner Giuliana Olmos of Mexico.

The only Canadian in the qualifying, 2014 Wimbledon doubles champion Vasek Pospisil, was eliminated in the first round last Monday.

And 2021 U.S. Open women's singles finalist Leylah Fernandez is absent as she rehabs a stress fracture in her foot suffered at Roland Garros earlier this month.

Beyond that, two Canadians who represent other countries also will be competing at Wimbledon.

Toronto-born Alejandro Tabilo, a 25-year-old who represented Canada when he played the Wimbledon juniors in 2014 and 2015, will be making his men's singles and doubles debut. Tabilo has played for his parents' native Chile since turning pro. He broke into the top 100 last February for the first time.

Erin Routliffe, who was born to Canadian parents in Auckland, NZ, returned to Canada at age four. She grew up in Caledon, Ont., is currently living in Montreal, and also represented Canada at the Wimbledon juniors a decade ago. Routliffe is the No. 11 seed in the women's doubles with partner Alicja Rosolska of Poland.

Now 27, Routliffe began representing New Zealand when she set out on the pro tour after graduating from the University of Alabama. She reached the doubles final at the Bad Homburg Open Saturday, and is at a career-high ranking of No. 34 in that discipline.

-- This report by The Canadian Press was first published June 26, 2022

Canada’s deputy attorney general says the Department of Justice had ‘no involvement whatsoever’ in the department’s review and delivery of documents to ongoing independent public inquiry into the 2020 mass shooting in Nova Scotia.

Quebec Cardinal Marc Ouellet is accused of sexual assault in documents tabled in Superior Court Tuesday related to a class-action lawsuit against the Roman Catholic Archdiocese of Quebec. The allegations against Ouellet are part of a series of claims made against clergy members that are included in two class-action lawsuits against the church that have been authorized by a judge.

The first possible case of human-to-dog transmission of monkeypox -- recently reported in a couple and their pet in Paris -- had been a theoretical risk up till now, said Dr. Rosamund Lewis, technical lead on the monkeypox response for the World Health Organization.

Parents of young children will need a prescription for some over-the-counter fever and pain medication due to a shortage in pharmacies, Toronto's Hospital for Sick Children is warning.

Two infant products, manufactured by baby gear company 4moms, are being recalled due to strangulation hazards, according to a consumer product notice issued by Health Canada.

Explosions and fires ripped through an ammunition depot in Russian-occupied Crimea on Tuesday in the second suspected Ukrainian attack on the peninsula in just over a week, forcing the evacuation of more than 3,000 people.