Feng Tian, a 17-year-old boy last seen in Montreal over three weeks ago, is still missing.

His family has spent the past month desperately searching for answers, all while navigating a new country and new languages.

Tian moved from China over the summer to join his mother, Sujing Nie, in Montreal. According to Nie, her son was still acclimatizing to the city and doesn't speak English very well.

When Tian first disappeared, she feared he was lost and unable to communicate.

Speaking to CTV News through an interpreter on Saturday, Nie described the past couple of weeks as unbearable.

Tian's routine in Montreal is steady, she said. He would go to his daily language classes at the YMCA on Stanley Street and knew his way around public transport -- but he never ventured outside the classes of his immediate neighbourhood.

He was last seen wearing a black denim coat, a black sweater, and black and white sneakers.

On Oct. 17, on the corner of Sherbrooke Street West and Cavendish Boulevard in Montreal's Notre-Dame-de-Grace (N.D.G.) borough, Tian and his family had dinner at a relative's house.

According to Tricia Bartley -- a community member who has devoted her time to helping Nie find her son -- the family had just eaten dinner together at a relative's house.

Tian left early to go and study for a test. It appears he made it back to his home on Melrose Avenue; signs indicate he warmed up a cup of milk for his mother in the microwave when he arrived, something he routinely did.

But Tian wasn't there when his family came home.

He left his I.D. and bank cards behind. All he had was his cell phone, which is no longer traceable, presumably because the battery died.

He has been missing ever since. 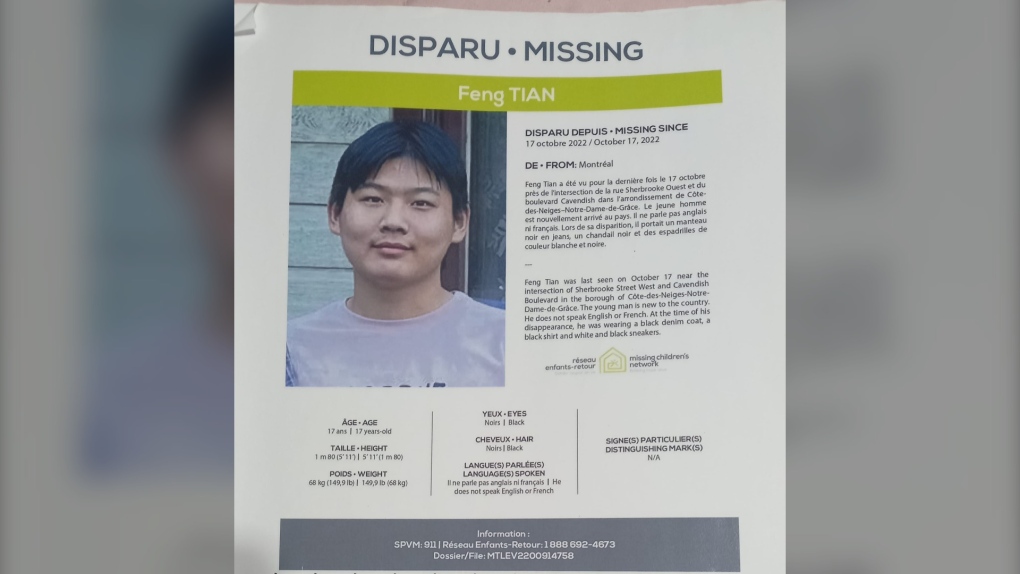 On Monday, community members will gather in N.D.G. to show their solidarity with Tian's family.

The event is organized by Tricia Bartley, who has grown close with the family over the past few weeks.

Bartley doesn't share the same mother tongue as Nie -- but pain is a "universal language," she said -- especially among mothers.

Bartley says its important to recognize that, while Feng is 17-years-old, he's still a child -- and is especially vulnerable given his newcomer status.

And this status shouldn't be an obstacle when it comes to finding him.

"[Tian's family] deserve answers. They deserve to have their story told."