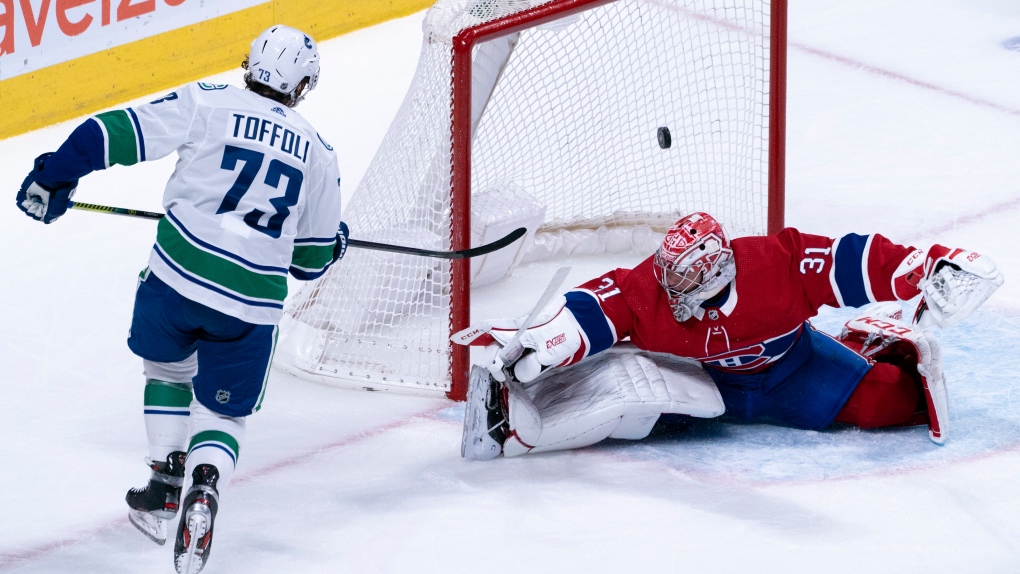 MONTREAL -- Tyler Toffoli scored 1:35 into overtime to lift the Vancouver Canucks to a 4-3 win over the Montreal Canadiens on Tuesday.

Thatcher Demko made 37 saves for his 11th victory of the season. Carey Price made 29 saves in the loss.

Demko, along with newcomer Louis Domingue, will be relied on in goal for the Canucks next month after they lost goaltender Jacob Markstrom to a knee injury last Saturday against Boston.

Montreal jumped out to a 2-0 lead with goals 90 seconds apart early in the first period. Byron scored first, his third of the season, after Max Domi sped up the wing into the Canucks zone and sent the puck through the crease and onto Byron's stick.

Weber added to the lead with his 15th of the season. The Canucks called a timeout after allowing two goals on six shots.

Vancouver scored with 4:03 left in the first period on a power-play goal from Horvat. The Vancouver captain has scored at least 20 or more goals in his last four seasons.

Edler tied the game at two in the second period with a shot from the blue line.

Weal gave Montreal the lead once more with his seventh goal of the season 50 seconds into the third period. Domi picked up his second assist.

Virtanen tied the game at 5:53 of the third.

The Canucks continue their Eastern Canadian road trip Thursday night with a trip to Ottawa to face the Senators. Montreal hosts the New York Rangers Thursday night at Bell Centre.